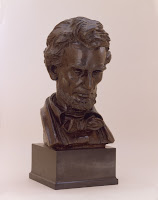 Found it! I wanted to post a book report on this during the Happy Holy Days break but I couldn't find the darn book. I looked all over the house and tried to think whether I had left it at work, or on the bus, or even in Vegas on my last work trip. Then I found it, of course, in my library. But I'm not really the one to blame for the disorganization. My college boy moved in their during the break and a queen-size air mattress pretty much filled the room and covered the bottom shelf where the book was.

The author is Richard Striner, the guy I heard on that NPR program about Lincoln and Slavery with the racist caller. We exchanged friendly e-mails and I looked on History Book Club to see if any of his books were offered as I had a lot of points saved up. The one I found was Lincoln's Way: How Six Great Presidents Created American Power (Rowman & Littlefield, Lanham, Maryland 2010). The reference to "power" was a little disconcerting as Lincoln was a war president and the others listed, Teddy Roosevelt, Franklin Roosevelt, Truman, Eisenhower, and Kennedy, were either war presidents or presidents who had fought in wars.

But it's not about War at all (or at least not very much). The "power" referenced, is the power of government to serve the people as in of, by, and for the people. The book hits a theme with which I am comfortable that Lincoln fused the Hamiltonian concept of a strong government with the Jeffersonian ideal (not exactly practice) of freedom with all having an equal start (not result, and notice how I dodged the word "opportunity."). That is, Lincoln was all about freedom, not just the obvious freeing of the Slaves, but opening the West to free soil for free men (and women) with the Homestead Act, Land Grant Colleges, and grants to transcontinental railroads and other internal improvements from the Whig tradition. Now, Lincoln's system wasn't all perfect, but much preferred by most in the Union (and me) in general opposition to the first four-score-and-seven of our nation which was mostly a debate about Slavery and its extension as we used national power to buy territory from France and seize it from Mexico culminating in the Supreme Court declaring that the property rights in the ownership of other human beings trumped everything else in the Constitution. And then, the Civil War.

Striner's point being is that with a great overview of U.S. history from Jefferson and Hamilton up to 2009, he credits only five presidents after Lincoln who had the same vision. Interestingly,  they are of both our major modern political parties, three Republicans and three Democrats. If we can possibly put partisanship and ideologies aside, we should be able to recognize all six as progressives in a passionate moderate tradition (OK, I invented that last part myself).

Lincoln is obvious as we have discussed many times previously, or just go see the movie Lincoln.

Teddy Roosevelt is defined by Progressivism (along with the bully pulpit, big stick, Panama Canal, Great White Fleet, Bull Moose, etc.) And if you don't believe he was a man of the people, check out my TR piece here.

And everyone knows of the progressive New Deal. But Striner summarizes FDR's reforms of the "Hundred Days"


The important point here is the conservative side of FDR--conservative, at least, in the old-fashioned sense of upholding traditional practices whenever possible. In the old-fashioned spirit, he positioned himself as a unifier--a patriot--in 1933. Americans saw him as a leader who was operating far above class, above party, and above the vested interests. And yet his policies in many ways saved the vested interests from truly radical changes. (Striner at 102).

This reminds me of my very bright roommate in college, now a big corporate lawyer still very bright and very conservative (I avoid entering debates with him). He said that FDR saved the country from going communist or fascist in contrast to nearly every other nation state in the 1920s and 30s. And there were a lot of both in this country - real communists and real fascists (unlike the hyperventilating,  false accusations today).

Striner references Mariner S. Eccles of Utah as essential to reorganizing the banking and economic sectors. And Eccles was the only true Keynesian of the bunch (promoting deficit spending on borrowed money to stimulate the economy). Striner acknowledges that the hit-and-miss attempts of the New Deal did not resolve the country's economic woes until full mobilization and huge deficit spending during WWII.

Truman continued in the people's path as President, establishing programs for integration of returning Vets into the new economy with the GI Bill and aid for housing. He vitalized our economy by educating scientists, engineers, doctors, and businessmen. He also moved the country a step further towards full Civil Rights by integrating the military.

Eisenhower even comes out as a cautious progressive. He was "a democratic leader who had mastered the sheer art of process." (Striner at 146.) And he put it to work for the people. There was the Interstate Highway System, one of the largest public works projects in history with great return on stimulus investment. And Eisenhower sent the federal troops to Little Rock in support of integration. Striner also promotes the "Hidden Hand" style of Ike working behind the scenes for progress and fighting against McCarthyism, breaking with Goldwater over Civil Rights, etc. (although he probably could have done a bit more of this.) He does include this from Eisenhower's diary as a representation of a common theme:


I think that far from appeasing or reasoning with the dyed-in-the-wool reactionary fringe, we should completely ignore it and when necessary repudiate it. . . . They are the most ignorant people now living in the United States." (Striner at 157).

Fortunately, Ike never met the 112th Congress. We could use him for what we expect of the 113th.

Striner believes Ike kept us out of war in Southeast Asia and that Kennedy would have. He also credits Kennedy with proposing Medicare and the Civil Rights Act that Johnson finally got through. Kennedy also established the Peace Corps and enthused nearly an entire generation towards service to each other and our nation. With regard to Civil Rights, Kennedy responded to the Medgar Evers murder (the one in The Help) with reference to Thaddeus Stevens (the Tommy Lee Jones character in Lincoln):


I don't understand the South. I'm coming to believe that Thaddeus Stevens was right. I had always been taught to regard him as a man of vicious bias. But, when I see this sort of thing, I begin to wonder how else you can treat them. (JFK to Arthur Schlesinger, Striner at 167).

Striner ends the era with:


And this is was "as good as it got." Lyndon Johnson and Richard Nixon--back-to-back failures--unleashed a tremendous series of mistakes from which the legacy of Lincoln could not recover. (Striner at 171).

From Viet Nam, through the Southern Strategy, Watergate and beyond. We followed with bumbling Ford, self-righteous, clueless, and stubborn Carter. Then Reagan who turned the people against their own government while supporting the wealthy and corporate welfare and demonizing the safety net for those who most needed the help. GHW Bush followed the same pattern and was cut down by his own party on the need for taxes. Clinton came in to triangulate and invite impeachment by serious moral flaws. Then W Bush. I'd better stop.

Striner ends with hope that eventually the goodness of America will lead us back to the ideals of Lincoln and a President who can take that vision of the people's power in service to the people by their self-governance and opportunity. He recognizes the themes in President Obama. Publishing in 2010, he indicates that history will yet judge him.

I still have hope for our current President. The only problem is he is facing opposition as tough or tougher than that faced by Kennedy and Eisenhower (whose quote is apropos today) and maybe even the enemies of Lincoln and Thaddeus Stevens. Let's hope and pray for a return to Lincoln's, and Striner's, ideals of Presidential power exercised on behalf of the people whose government this is.