It was an amazing historical re-enactment of people in books come to life. We only have the barest physical traces of them left in our modern world. I've seen the pillow in the Petersen House across the street from Ford's Theater with the stains of Lincoln's blood. In the movie Lincoln's head lies on a pillow with blood flowing red in the same pattern as the stain. "Now he belongs to the ages," said Secretary of War Stanton and while I knew he was going to say it, it seemed so natural. The dead body of the President contorted on the small bed had the artistic elements of Spielberg to portray it in pale white but also with a slight glow without being obtrusive. Ford's theater was not portrayed and the assassin had no mention. It seemed only right.

But we have something more from those people in history portrayed so well in this film. We still have a Constitutional Union of, by, and for the People, all the People, even if it still needs a lot more work to become "more perfect" in that principle.

There were so many details of history that appeared without explanation or drawing attention to themselves. My favorite was the Native American officer in the line-up of General Grant's aides. I could not repress an excited whisper to my wife, "That's Col. Parker!" I've read that Lee at Appomattox was concerned about the dark-skinned man assuming he was a Negro. Col. Parker went on to be the first Native American Commissioner of Indian Affairs appointed by President Grant.

The movie is a little heavy with a lot of dialogue - almost Shakespearean in that way as a clear heroic tragedy but with its comic relief from Lincoln's stories and young Tad's activities. And the meaning of Lincoln is all there contrasted with the practical politician William Seward as Secretary of State and especially with Congressman Thaddeus Stevens, a true extremist even if for a good cause. He was way ahead of his time with his views on Negro Equality but Lincoln was able to temper him to moderation in promoting the final vote for the Thirteenth Amendment in the House as merely equality under the law.

The film portrayed an extended discussion in the cabinet about the necessity of the Thirteenth Amendment with Lincoln's explanation of the Emancipation Proclamation under the "War Power" as President but of questionable legality at the time and certainly once the war had ended asking if they were to place those freed people back into slavery.

There is also good discussion of the role of sometimes ugly politics in the process of accomplishing the People's will in our government of, by and for . . . well, you get the point. If you don't - keep reading this blog. Or better yet, go read up on Lincoln and especially his own words.

I asked my family members who went to the movie with me what their thoughts were. Their comments follow:


My wife:  She was impressed with the acting saying they all deserved Oscars [and I'm very much in agreement] She also commented on how Lincoln was so powerful regarding passage of the Thirteenth Amendment that he was so convinced "this is the time it has to happen, now!" She added that the fight in Congress was interesting with the smooth leader of the Democrats [Fernando Wood] "How does it ever change? There's that evolution that it goes from one day to the next but it hasn't gotten very far from that ugly taking of sides and yelling at each other." There was the scene in the middle of the night with Lincoln asking the two telegraph operators whether they thought they were meant for this time. It appeared that he had doubts about himself. She liked Lincoln's explanation of Euclid's theorem that if two things are equal to another thing then they are equal to each other, or as she explained in Math teacher terms, "if a = b and c = b, then a = c." [Yes, a Republican who used Math and logic.]

My College daughter:  She said, "It was long and they swore a lot but it was really good. But all the parts about equality were very important to me." Because as an educator, she understands that that all children still do not have equal opportunity in education. She sees it in the Hispanic kids she works with.

Her Boyfriend:  "It was good. I cried. Liked the way it ended." He explained that the assassination was done so well by seeing the announcement in another theater where young Tad was. The last thing you see is his son crying out and then at the end it flashes back to the speech where Lincoln is talking about upholding rights and honoring the deaths of those who have left widows and orphaned children [the Second Inaugural].

One College Student Son:  He really liked it. He said that it related a lot to what is happening in politics today. We have a lame-duck Congress. It feels like regardless of what we need to happen it won't happen until the next Congress is seated. The lobbying was very interesting as it was under the radar and secret and sometimes dirty. He was impressed with Lincoln's frustrated but strong statement, "I am the President" and he intended to use his power as he willed..

College Freshman Son: He said he didn't know what the whole Thirteenth Amendment was. It was interesting that Lincoln was manipulating politics and maintained his values while still playing the game of politics. The Emancipation Proclamation was on questionable legality but he wanted to do it. It's really important how people are born and raised to not have prejudices.

High School Son:  He said he got really emotional at the end. He really liked the part about the Congressman [Thadeus Stevens SPOILER ALERT] getting into bed with his black servant [common-law wife of 23 years]. He said, "We have to look at our past and realize we're not always right. We're a great nation and a lot of people think we always have been. It's hard to look back at the Blacks and think this really happened. Also the disrespect in Congress." 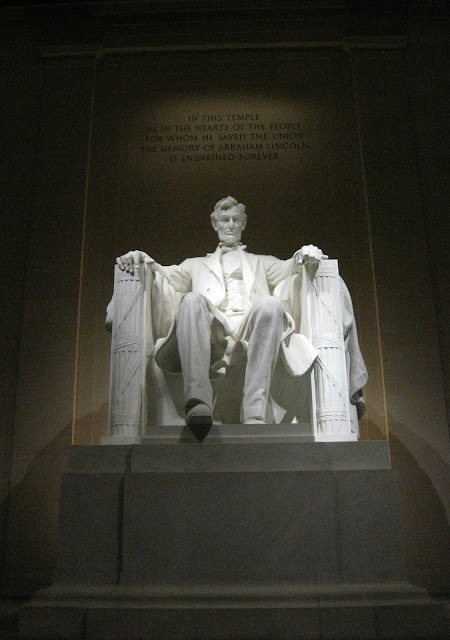