Yes! My good buddy at Keepapitchinin.org sent me a copy of Bro. Brigham's letter back to John Lewis and his jolly friends! It's in the public research files (I hadn't found it in the indices yet) so she didn't need to sneak it out of confidential files or anything. 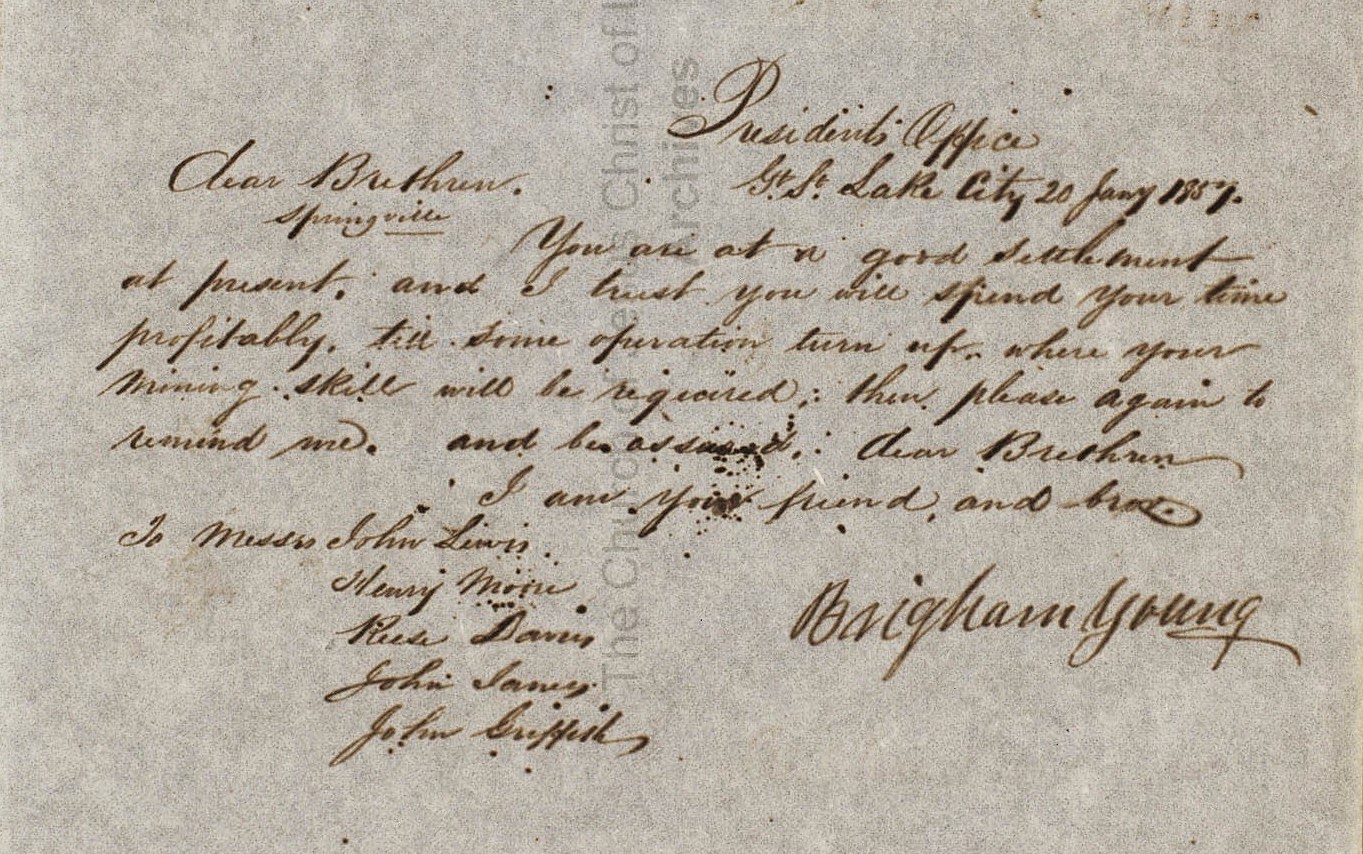 So far we've determined that the Jolly Welshman did not stay together. At least two of them, Henry Moore and John James, went to the Carson Valley. It also appears that our John Lewis may have gone but kept on going over the Sierra for the gold fields. And, there is a possibility that Jane was still alive and may have remarried in Jacks Valley (south of Carson). More research is needed to firm up these hints.

We know (or should know) that no argument can maintain any semblance of rationality when the comparison is made to a certain Austrian corporal. This one is valid because it's, well, hitler.

Skimming through old newspapers on-line as any good genealogist does, I was startled to see der fuehrer's face. And startled again to see the artist's name. I thought it was worth sharing.
Read more »
at 7:37 PM 2 comments:

Just discovered, a treasure trove of letters to Brigham Young on-line from the LDS Church History Library. Including this:

John Lewis arrived in the Salt Lake Valley on September 26, 1856, along with his wife, Jane Vaughan Lewis, their son, John Samuel Lewis (age 9), and mother-in-law Eleanor Jenkins Vaughan (widow). As we had believed, they went to Springville although we still have no information on Jane after arrival.

Yeah, I couldn't resist this one. It's a classic.

I'm in a good mood just back from Temple service. So without even asking (it's late), I'm just going to cut and past Anonymous D's email message in here with minor edits and a final comment or two:


I was just thinking about proving the Book of Mormon. Of course I know it's not possible. That seems to me to be the point. Just imagine for a minute that you're God, and you are trying to get the point across that the only way you can get your children to come back to you is to trust you? So you give them a book of instruction that essentially explains their situation and pleads with them to trust you. If the whole point is trust, would you give explicit, irrefutable evidence that your book is true or you would ask them to experiment upon it themselves and learn that they can trust you because it works? Especially in the light of the fact that trust/faith seems to be essential in really learning something for yourself, and changing from a fallen/dark being into an enlightened being.

A friend suggested (a few days before Furguson which I will not further address) that we have been in a Cold Civil War since 1865. What with Jim Crow, KKK, Separate but not really Equal, outright Segregation, and redlining neighborhoods, religious bans on black participation and mixed race marriage, unnecessary voter elegibility crack-downs, and the current conservative push to refuse economic help to the needy because they are either undeserving black criminals or welfare queens (thank you, Ronald Reagan), it seemed like an accurate assessment.

Unfortunately, the term is not unique and is all over the internet including from Glenn Beck, of all people, who cries crocodile tears for his part in tearing the country apart like some TV Evangelist caught with a woman or young boy. I'm not buying it from Glenn. And of course, he continues to stir the pot by predicting that somebody is going to go crazy and start something to turn us all into Civil War warriors and blow this country apart.

Remember When Government Was Good?

It really wasn't any better than it is now, we just thought it was at times. Like when we wanted to grow a cash crop or even just a little something to eat. Maybe plant a tree? 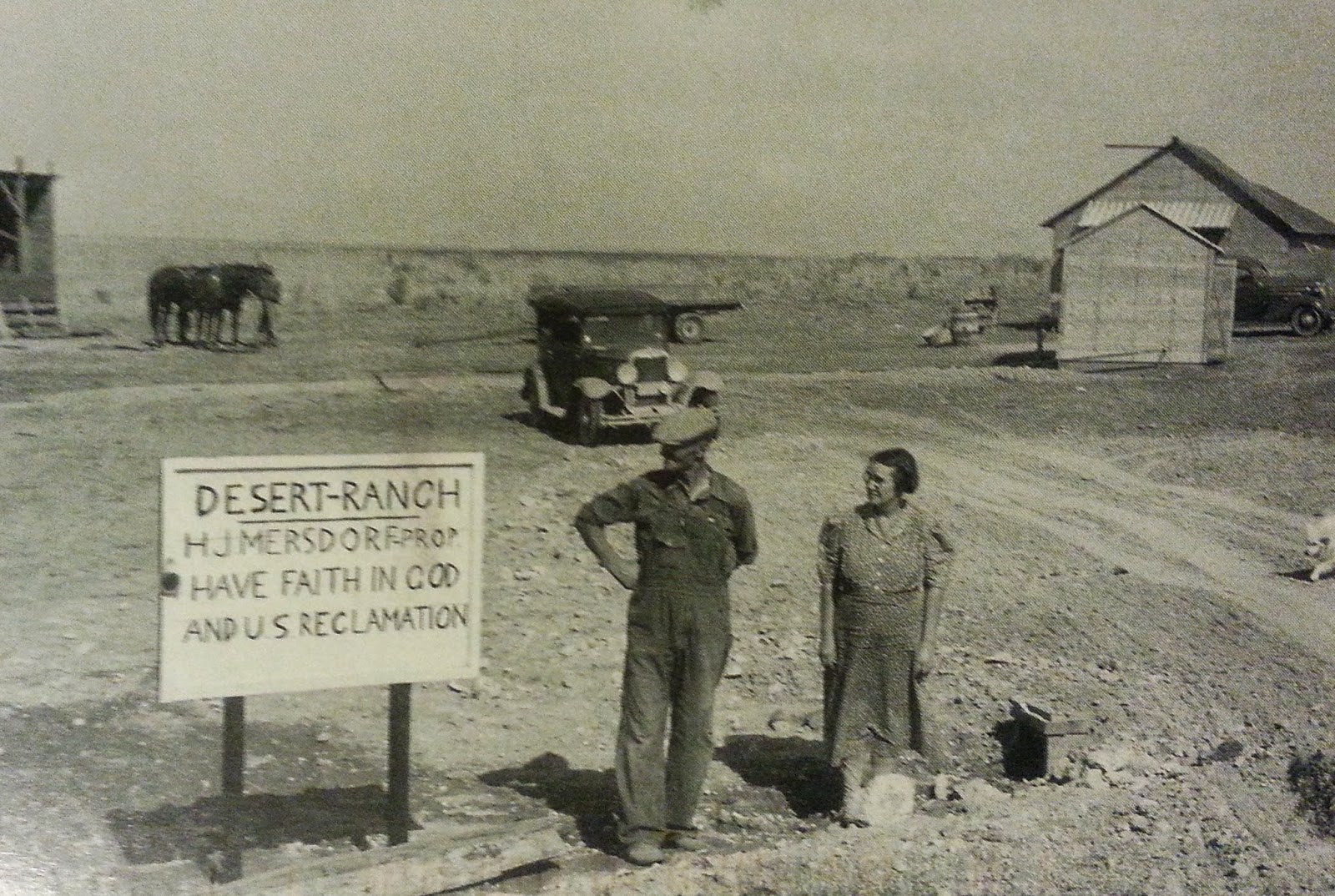 A friend (from DC, but don't hold that against her) sent me this great postcard showing grateful farmers. Grateful both to God and the U.S. Bureau of Reclamation that made much of the West what it is today.

Do you know where your water comes from? The government, on a slightly revised plan inspired by John Wesley Powell, built dams and irrigated vast acreages for water associations and districts that paid back with little or no interest and with inexpensive operation and maintenance costs (i.e., they didn't build that). It was tried with private interests and phenomenal economic disaster on the Rio Grande in New Mexico, helping to inspire Congress to start Reclamation.

This is such a great newspaper find with Mormon Missionaries and possible family both referenced even if not directly connected.
First the missionaries. There wasn't much information easily to find about Abednego Spencer Williams (1827-1896) born in Blaenau, Monmouthshire, except that he came to Utah in the 1880s, and is buried in Ogden City Cemetery.

There's a bit more for Israel Evans (1828-1896). His story reads like an overview of westward expansion. Born in Ohio, his parents joined the LDS Church and moved to Missouri when he was only five. They relocated to Nauvoo, Illinois after the expulsion from Missouri and then left Nauvoo ahead of the mobs to follow Brigham Young. Israel marched with the Mormon Battalion in the War with Mexico and was present for the discovery of gold at Sutter's Mill. Instead of becoming a rich Californian, he went to Utah. He served a four and a half year mission to Wales and led a successful handcart company (only two deaths) to the Valley in the turbulent year of 1857.

The year before, 1856, when Elinor, Jane, John and family left for Utah, Israel helped the Welsh Saints who took the train from Abergavenny and provided a moving account in his journal. He helped the Saints load onto the S. Curling at Liverpool. Elinor had gone a few weeks earlier and sailed on the Enoch Train. John and Jane Vaughan Lewis were likely on that train heading out from Abergavenny and who knows which Vaughans left behind were there to bid farewell:

Charmed. My breast no longer savage. Self-indulgence is the order of the evening.

It took me a good few hours to get my iTunes set up on a new computer. There are many other competing, digital stereo systems out there. And I'm stuck with iTunes because of the multiplicity of playlists I spent so much time developing. I'm not starting over.

The tricky part is to remember to move not just the iTunes music files, but the MP3s as well. And some of them are hard to find. I still can't figure why I had to transfer "skate away" by Dire Straits all by itself before it would work. "Enchante, what can I say?"
Read more »
at 9:48 PM No comments:

Talk from an elected Congressman of the republican party, just revealed the whole game!