The Latest Revelations on Jared Kushner

The latest news reporting on trump scandals is that first-son-in-law, Jared Kushner, may have attempted to set up secret, back-channel communications with Russian officials during the transition. This is reported independently by the Washington Post and Reuters who claim sources (i.e., leaks) from within US Intelligence Agencies.

This immediately tells us that trump's war with US national security interests is not over and they are fighting back. The leaks are troubling, not as much as leaks but what they appear to reveal.

First, they reveal that US security agencies do not trust trump and his family. Whether the underlying facts are true or not, there are powerful elements of the US government who are undermining trump. Some of these disclosures may be technically illegal. However, all federal employees, political or career, sign an oath that their highest duty is to the Constitution of the United States. It is not to the President or any party or political view. It is to the Constitutional Union of these United States. (If you need a Hollywood explanation, try the scene in Clear and Present Danger in which James Earl Jones playing he CIA Director (the voice of Darth Vader) tells Harrison Ford, playing  government agent, Jack Ryan (not Han Solo) that his highest duty is to the Constitution, not to the President. Now, it's still very troubling that this appears to be a silent coup of the security forces by leaks to the press and likely formal and appropriate revelations to Congressional Committees and the new Special Counsel. This is really big time.

Family History can get real strange. I planted irises this Spring. It kept reminding me of a relative/friend of my Mom's that I remember from growing up on Finn Hill. We were far away from family, but mom found one, a descendant of Daniel & Peninah Cotten Wood and she shared some copies of Wood Family history that I still have.

Her name was Alta Brown. And remembering that she and her husband ran Brown's Iris Gardens, a rather beautiful place up there when Finn Hill was not all houses, I thought I would try to find her on Family Search to see how we were actually related. It was a frustrating search as I ultimately found that her name was Hazel Alta McCarty Brown (1909-2003), so she was very contemporary with my grandparents.

I remembered that they sold irises. The internet informed me that they hybridized irises. Her husband, Rex, registered 93 varieties. Alta registered a whopping 237 varieties! 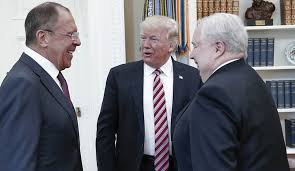 At Yalta, trump would have said, "Do you want more than Eastern Europe? Sure, take Western as well! I know who my buddies are!"

trump would have resolved the Cuban Missle Crisis by saying, "Forget Cuba, I've got some great golf courses in Florida and NJ where you can park your missiles!"

A New Quest for the Welsh, Frond Finial

We really like the color as it is close to Welsh slate with a slight greenish tone.

Here's what we were going for: 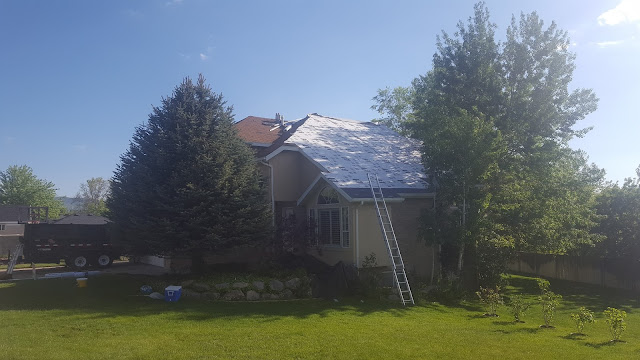 The joke yesterday was that I was getting my wife a new roof for mothers' day. She'll still get her regular flowers--in the garden. The Saturday before is time for the family tradition of buying and placing bedding plants in front of the house as we are solidly in May and almost past the freeze threat in the shadow of the everlasting hills. With global warming and all, we're pretty safe. However, there are no longer any children at home to help me plant annuals which is just fine as gardening is one of my new passions (note the lilac hedge above, lower right, coming in just fine!).

Waking up too early this morning due to other stresses, the thought came to me that the number-one, cliché responsibility of a good provider is "to put a roof over your head." As we're getting quality shingles with a "life-time" of 30-50 years, they will last me out and I have fulfilled my obligation here.

Sol Hurok is credited with:


"The sky's the limit if you have a roof over your head."

We are getting a slate-colored asphalt shingle "a cool gray with a beautiful green undertone--exactly like real slate." Green is my wife's favorite color and slate matches with our Welsh homestead. (Our house, like nearly every home in Britain, has a name, "Tŷ Fychan" or "Vaughan House.")

So, in case you somehow haven't heard, trump fired James Comey, the Director of the FBI for, get this:

OK. I can't help it if I find it hilariously funny in a dark humor sort of way.

I just got an email from a friend who has been walking the world since retirement from my office. He says:


We got through Nixon. We will get through this. I am more concerned in the long term about global warming than I am about Trump.


He has a couple of good points there.

A Bad Day for fascists

In honor of the French election in which the far-right, nationalist candidate resoundingly lost, we hope and pray for America and share the following:

I Guess I'm the Oddball

I get it. I understand.

I know why you like trump so much. Whatever he accomplishes or doesn't, it's just the way he says things. He uses that bigly edgy voice to bash Democrats, Illegal Aliens, the Liberal Elite, Government Workers, Godless Scientists, Abortionist Proponents, Muslims, Secular Humanists, Mexicans, it goes on and on.

I get that you are not racist because if only "those" people behaved like you, like real Americans, then they would be OK. That would be like Congresswoman Mia Love living in Saratoga Springs, Utah and acting just like all her neighbors regardless of her darker shade of skin. It's like Raul Labrador, Congressman of Idaho who may have come from a Puerto-Ricana family but went to BYU and goes to church and acts just like all the other Mormons and has conservative credentials for the non-Mormon Idahoans. You love the guy! You're not racist!