We're Not Done Yet!

Yeah, I can cut and paste more email with Anonymous/D. As long as I don't have to address the Republican clown car with Romney waiting aside the road for it to crash.


While still not blogging, and enjoying telework especially when I can't link to office computers, I note this for the record that there will at least be half a win for same-sex marriage.

Full Faith and Credit shall be given in each State to the public Acts, Records, and judicial Proceedings of every other State. US Cons. IV.1.

That's pretty clear and concise language from the Constitution even if there is nary a word in there about marriage. If same-sex marriage is legal in one state, it has to be recognized in all just like they have for Nevada and Maryland quickie weddings (there used to be blood tests, etc. in most states). So, it they have to be recognized in all, some states just won't allow it to happen in that state - the wedding, that is, not the state of marriage.

Simple and straight forward preserving both the right for whomever to marry, and states rights, to some degree, in a federal union (of states - not gays)
Read more »
at 5:00 PM No comments:

Is It Time Yet?

No. And it will never be. The coming presidential election fills me with dread. Hillary will be a fine president but the 47% (that voted for Romney not the 47% who . . . oh, never mind!) will make it shear misery for the nation and her. She may slip and commit an actual foul. And I sure don't want Bill in the White House again with too much time on his hands.

What pushes me to this cataclysmic decision as I go off to confer, converse, and otherwise hobnob with my fellow weirdos, was the vitriolic religious hatred for Senator Harry Reid for daring to confirm a new member of his church who happened to be a former Senator (Republican) and a friend. And that was from people in Harry's own church!

Anyway, I'm not ending the blog but it will see only sporadic posting from me as I just don't want to do it anymore. I'm tired. And my left arm hurts.

So, I leave you with this recent sparkling repartee between me and Anonymous D. I started out, for which I take full responsibility - but I may be closing comments on this:
Read more »
at 7:27 PM 1 comment:

My Grandpa Worked for the Union Pacific

We knew that. It shows on the 1930 Census that his dad, George Robert Vaughn, worked as a Machinist for the U.P. and son George was a Machinist Helper. Technically, he was an intermittent laborer at the start of the Great Depression. Fifty cents an hour was pretty darn lucky. And I was thrilled to see some Union Pacific employment records pop-up to show all that on Ancestry.com. 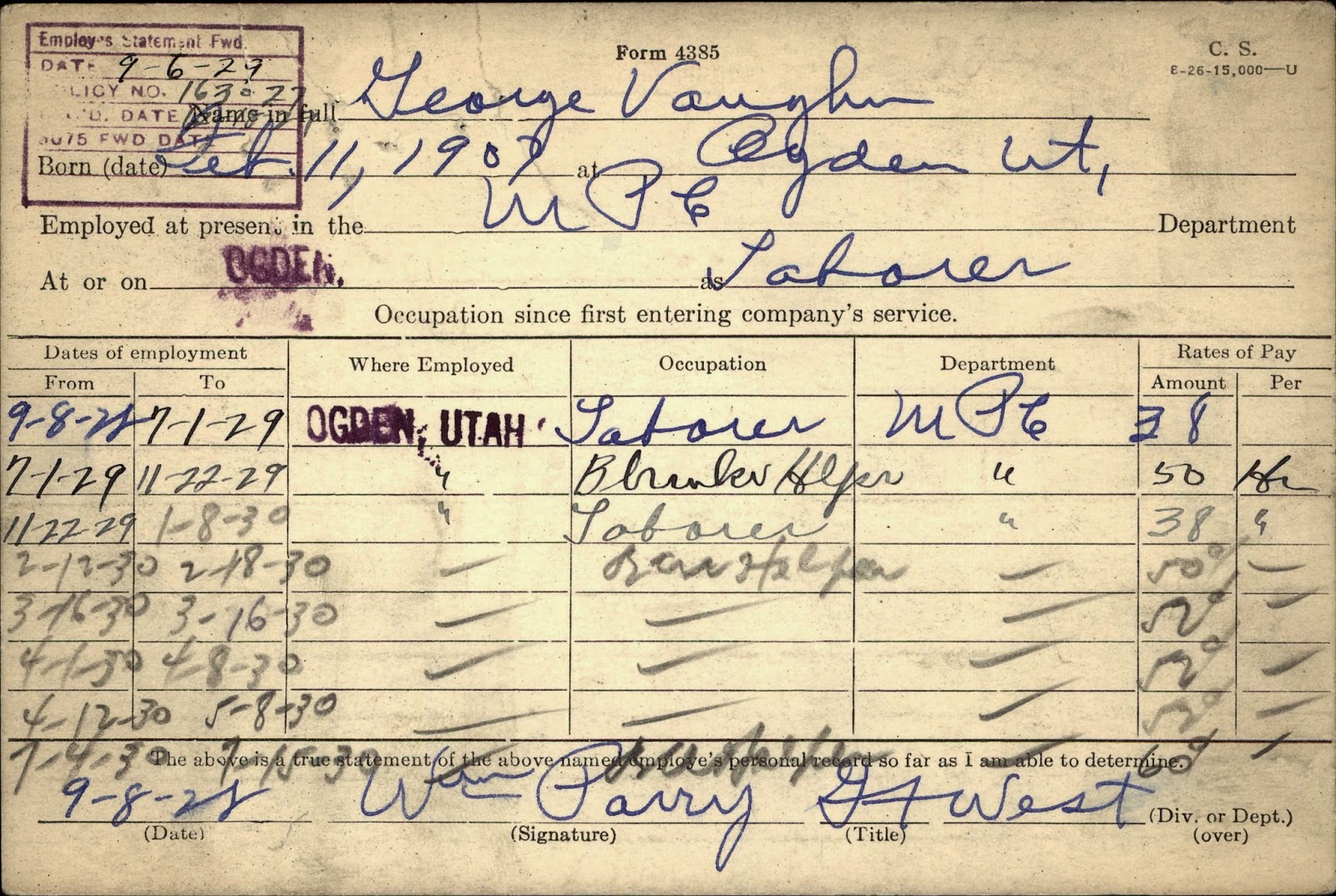 When Family History and Law Come together

Found Uncle Samuel, one of Elinor's boys, in trouble with the law. He was up on Manslaughter and the criminal record had him not guilty. The full story is in the newspaper (thank you, National Library of Wales!):

A Cub Scout's Duty to Diversity 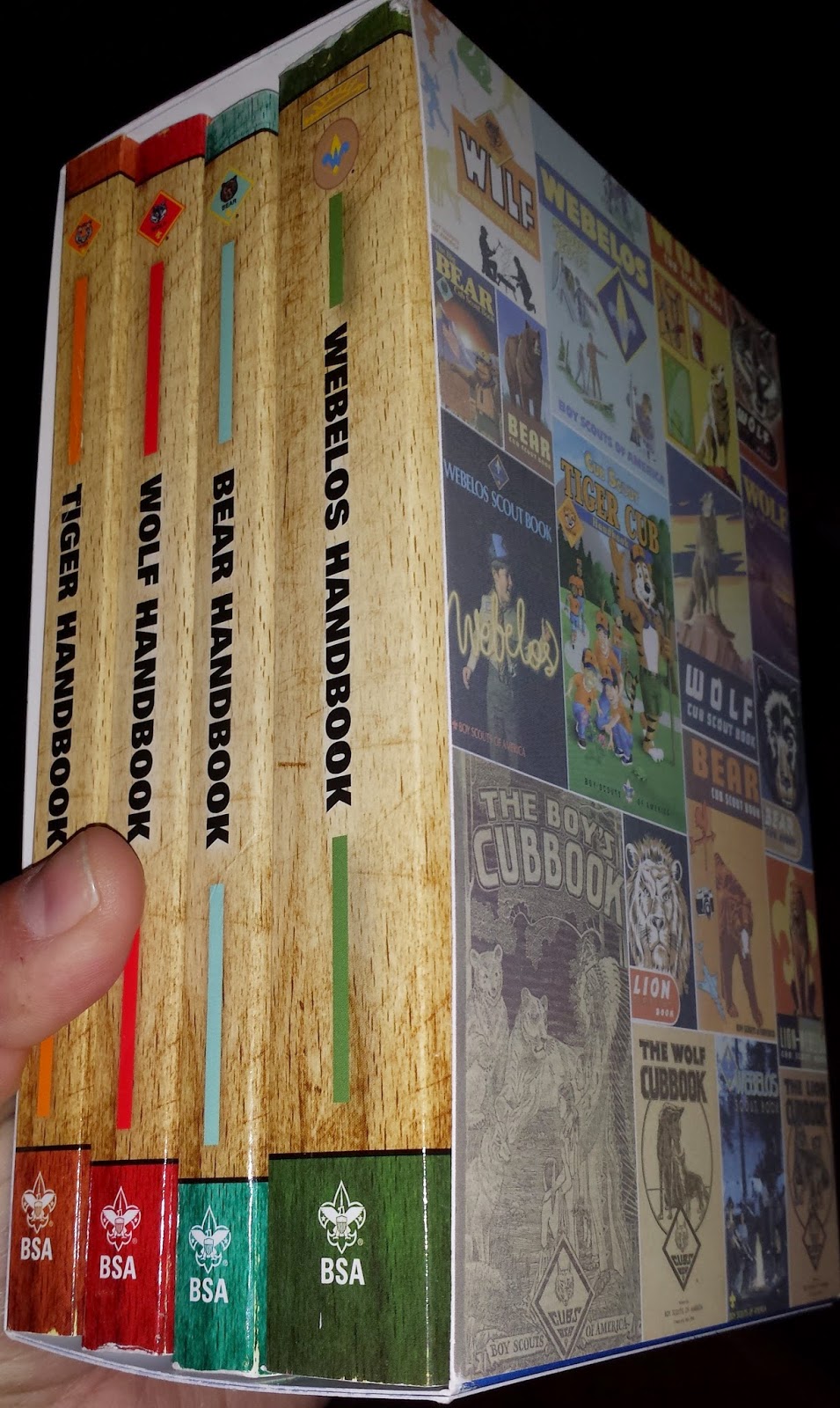 The new Cub Scout Handbooks are out!

This is really cool because my wife was on a national task force that re-wrote (simplified) the Cub Scout program. She has gone to BSA headquarters in Arlington, Texas (between Dallas and Ft. Worth) a few times. She's been on webcasts, provided training sessions at Philmont and any where else she gets asked. She explained the new program to a sell-out crowd (actually, no charge) at the old white church in Centerville (built 1879).

The main part my wife had to draft was the Bear requirements for religious participation. (BSA remains a faith-based organization). She worked hard to make sure it dove-tailed with the LDS Faith in God program, one of the more demanding religious awards, along with the awards of every other religion that works with Cub Scouting. While a faith-based organization, the BSA doesn't care what Faith or what God one worships. So, religious diversity is a big part of the training for boys and adults. As part of the diversity aspect of the religious portion of the Bear requirements is a family activity to discuss an important American religious figure.

My wife asked for my help on that one. So, putting on my thinking cap, my diverse knowledge of American History, and checking details with the internet (OK, yeah, a little bit of Wikipedia), I came up with the following in the attempt to simplify language for the understanding of a generic nine-year-old:

Gifford Nielsen is going to give the prayer. When I went to BYU in 1975, he was the Quarterback.

Conference is always best when it comes at Easter. For live-broadcast and past conferences, go to LDS.org. Here I will take some notes and make a few comments for my own and to share with any who would like to read.

I re-posted on Facebook one of the Easter poems of my distant cousin, Henry Vaughan.

So, I'm perfectly happy to stay home and live-blog it from BYU-TV. But my boys want to go to the church and then out for ice cream. I said we could do ice cream regardless and they want to hold to tradition.

I'll update in here later with some general notes or comments. Checking around the internet, it looks like live-blogging isn't the "thing" it used to be. I certainly get fewer hits (maybe justified). The live-broadcasts are easier to access all the time. The old-style of blogging has turned into cute tweeting or whatever other briefer forms people are using. Sigh, for the good old days!

We're back! You can watch this live and see past sessions at LDS.org.

Had a nap while one of my boys painted the bathroom. Did a good job too. We'll do another coat when that dries. I was going for the turquoise color of the Caribbean, but it came out more of an "easter-egg" pastel blue - which is cool.

President Uchtdorf reading the sustainings and releases. Primary Presidency and Young Mens Presidency changing. They kept Sister Wixom as President of the Primary and switched out counselors.

Some yahoo is yelling out "No's!!" to sustaining Pres. Monson. Not sure what that is about. Pres. Uchtdorf says the votes are noted. And at the end he asked them to talk to their Stake Presidents . . . .

My 18-year-old is there with friends who had tickets.

Getting set up here. These are my personal notes on General Conference shared (potentially) with the world! For direct broadcast, do not rely on me, but see LDS.org and watch live or recorded sessions.

It will be interesting if there will be any mention at all of President Obama's recent visit to Utah. I'm bettin' on President Uchtdorf.

President Monson is there looking rather rather thin and drawn.

Please note that they started with the Mormon version of "Cwm Rhondda," the great Welsh Hymn.

The past couple of days have been kind of exciting for us local LDS supporters of the President.

The President sat down with leaders of the Church of Jesus Christ of Latter-day Saints and exchanged compliments. He complemented the Church for its service around the world and promotion of Religions Freedom (!). Church leaders complimented the President on his support for family values and the good example he sets with his own family (!) They discussed Immigration Policy, most likely on the moderate principles of the Utah Compact (!) (I'm not making this stuff up. You can read the Church's news release here.)

Then, somehow, the President picked up some University of Utah sports memorabilia. I guess BYU was just a valley too far.

Box Elder and Fort Ogden Explained through the Magic of Welsh

Nearing the completion of my audit of Welsh 102, I'm starting to get it. Learning a new language is an incremental process. I can now read some text and figure out the context even if I can't translate all the words. Once I realize the context, more of the words make more sense. It's a process of steady growth in understanding. We don't remember the process with our first language as children. And learning one second language helps with any others.

There is a wonderful new history and language source online from Signature Books (shout-out to my friend, RP!). They have historical Mormon periodicals and newspapers, mostly from the 19th Century, and some in their original foreign languages. I have been collecting Ron Dennis's translations of Udgorn Seion [Zion's Trumpet] and Prophwyd y Jubili [Prophet of the Jubilee] in English, but the online, original versions are searchable PDFs and I found something in Welsh that I hadn't yet discovered in English:

Here's the English translation courtesy of Ron Dennis's work (I'm not nearly that advanced and still hold my old friend in awe):

A Visit from the Prophet

OK. This is not a really bad April Fools joke. And it is all absolutely true.

Just as I don't support modern polygamy (FLDS) and still respect my ancestors for their historical, religious practices, I can respect my relatives who did not stay with the Church of Jesus Christ of Latter-day Saints (LDS) but left and became members of the Reorganized Church of Jesus Christ of Latter-day Saints (RLDS). Yes, you may need a score card to keep track of this one.


"On the first of November we bade Sr. Lincoln and her family, Brn. William Anderson, Job Hall, Thomas J. Andrews, Peter Canavan, A. C. Bryan, and others farewell, and left the city of San Francisco, in company of Bro. Daniel S. Mills, who accompanied us as far as Sacramento, where we bade him good-bye, he bound for Salmon Falls on an errand of mercy; and we en route for Reno and Carson City. We reached the latter place early Thursday morning; and in the afternoon reported to Bro. A. B. Johns, president of the district, and spent a night and a day in Jack's Valley. On Saturday we returned to Carson, and on Sunday morning and evening we addressed those of the citizens of the city who chose to gather at the court-house to hear us; the attendance was good, on both occasions, and the Saints seemed to be pleased with the effort made.