The Vaughan Family Crest: No, We're Not Really from Slytherin 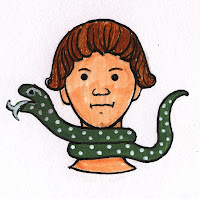 Sigh. I've been waiting for someone to ask, but since no one has I'll go ahead and answer anyway. The unarticulated question is, why do I have a picture of a boy with a snake around his neck as my profile pic? It is a legitimate symbol of heraldry belonging to some of my ancestors bearing my surname - Vaughan. That's the old anglicized spelling of the original Welsh "Fychan" roughly sounding like "Vaughan" but with two clear syllables and sort of a throat-clearing in the middle. (Which makes me feel a little better about my Little League coach referring to me as "VAH-gun" all that season. Maybe he was Welsh?) My people dropped the second "a" or maybe it was forced on them at Castle Garden, New York, when they arrived in this country in 1886.

I know that anybody can go to that kiosk in the mall and buy a family crest. But it's taken me 25 years and a trip to Britain to figure this one out. I also know that even if one can prove direct descent from a noble family, that does not mean one may have the right to use the coat-of-arms. My family fell out of the gentry many generations ago and I don't think we're getting back in. There is only one branch of the family, the Vaughans of Courtfield, near Ross-on-Wye, Herefordshire who still claim this descent from nobility. They've also produced a Bishop or two and even a Cardinal as the Catholic branch of the family. I renounce any claims to ancestral properties and as I do not claim any actual title, I do not run afoul of Art. I, Sec. 9, clause 8 of the US Constitution prohibiting such in this free land of opportunity. Oh, and as I do have permission of the actual artist who designed this version as explained below, I'm just going to go ahead and use it.

Maybe it's the snake thing. My wife thinks it's disgusting and I'm not sure she would have married me had she known she was marrying into a reptilian family. And the funny part is, there is no solid history or consensus on what the symbol means and how it came about.

There are basically three versions. The most entertaining is that it represents the story of a Welsh infant prince who was set out in the garden to eat his breakfast bowl of bread and milk. When the nurse came back to him, she found a snake (a poisonous adder) wrapped around his neck which the infant then killed. He grew up to be a great warrior king, Moreiddig Warwyn, and prided himself with the reminder of the Hercules-like story by adopting the snake as the family symbol.

Another, and sounding the most likely, is that it represents the noble prince who was actually born with the cord around his neck and survived. There is a variation that the cord around his neck was the result of his mother being bitten by an adder and that the child had a birthmark like a snake bite. And the strangest, for which I haven't found any really good explanation, is that it represents a group of  Saxon boys being strangled or beheaded - the usual appearance is in a group of three heads. Why the ancient Brits would have done their strangling with a snake and not a regular rope is not at all clear.

Solid history is that it first appeared as a family crest armorial symbol when knighthood was granted to Roger Vaughan (abt. 1383-1415) who claimed descent from Moreiddig Warwyn. He won his title, even if unfortunately awarded posthumously, when he died on the Field of Agincourt defending the King, Henry V. Last summer, we visited Sir Roger's effigy monument in the little, ancient Church of St. Andrew, Bredwardine, Herefordshire, on the banks of the River Wye.

Sir Roger, whose name in Welsh was "Rhossier Fychan," married the lovely Lady Gwladys daughter of David (Dafydd) Gam who was actually named in Shakespeare's Henry V, Act IV, Scene 8, line 2813, as one who died at Agincourt, presumably along with his son-in-law who was somehow missed by the Bard.

The history of these Vaughans can get rather complex. And I should probably point out, while this is a Welsh family originating in the ancient kingdom of Brycheiniog (later Breconshire now part of Powys), the Welsh Vaughans obtained their titles, lands and wealth through alliance with the English Norman Royal Families, sometimes at the expense of their Welsh people (likely including the horrible slaughter of the Welsh attacking Painscastle (1196) after it was held by the alleged witch, Matilda or Maud de Braose, wife of William de Braose). Some also lost their heads being on ultimately the wrong side (Yorkists) in the War of Roses.

Sir Roger is credited as the originator of the Vaughan surname that is fairly prevalent in the Valleys of the Wye and Usk in southeastern Wales. As the histories say, most Vaughans in the area claim descent from Sir Roger. I have a direct descent, thanks to a cousin with the research, that goes up through the Rices, Morgans, etc. to a daughter of Sir Roger. We have not linked our surname in direct line back to Sir Roger, but we are getting closer. The problem is the origin we have for our surname is from an illegitimate birth in Hay, Breconshire, in 1789. The mother was a Vaughan and we now think she came from Glasbury, just west of Hay. And those Vaughans possibly tie into the Vaughans of  nearby Porthamel, Talgarth, and ultimately Tretower and a son of Sir Roger, also named Roger Vaughan.

One of the greatest experiences of my family history work was to visit Tretower Court and Castle, now under the control of Cadw, the national historic trust of Wales, as a public attraction. It is located a little north of Abergavenny, Wales, on one of the routes to the Wye Valley. We saw the first real depiction of the Vaughan crest arms on a monument stone in the courtyard for a Charles Vaughan of the 18th Century. I knew the manor house had been recently renovated. Yet I was not prepared when I entered the Great Hall and saw the amazing, recreated wall hangings depicting the 15th Century history of the Vaughans. My wife and I sat at the Lord and Lady's places at the banquet table, my wife not nearly as enthused as I was (probably the snake thing).


After returning home, I contacted Cadw by email and asked for more information, even a print if I could get one of those wonderful pictures at Tretower. A historian connected me with the artist commissioned for the work, Tony Barton, who was willing to share some digital pictures, designs and explanations for the various pictures. I was very grateful.

Temple work has been done for Sir Roger and Lady Gwladys. Of course with likely thousands of descendants, it was done dozens of times before new.familysearch arrived to help us consolidate records. My concentration is to find those lost individuals and family groups connected to my family origins in that beautiful, green valley along the banks of the Wye. I've found a few. There's a lot more work to be done.

ADDENDUM OF MAY 10, 2011
I meant to include a paragraph on what "Vaughan" or better, "Fychan" means in Welsh. A literal translation might be "little" but it relates to the word "bychan" for "calf." And the word is used to designate a son by the same name as the father, meaning "the younger" or "junior." So, for instance, Roger Vaughan's father was also named Roger. Actually, it was Roger (or Rhossier) Hen. "Hen" being the word for "the elder" or father. So, his son also named Roger, would go by Roger Vaughan in the anglicized form. Interestingly, Roger Vaughan had a son also named Roger. So his name was Roger ap Roger Fychan (Vaughan). The "ap" is used in Welsh genealogical tables meaning "the son of." And after that "Vaughan" stuck as a surname for my people. There are a lot of other Vaughan families out of Wales as the "Junior" name was fairly common. 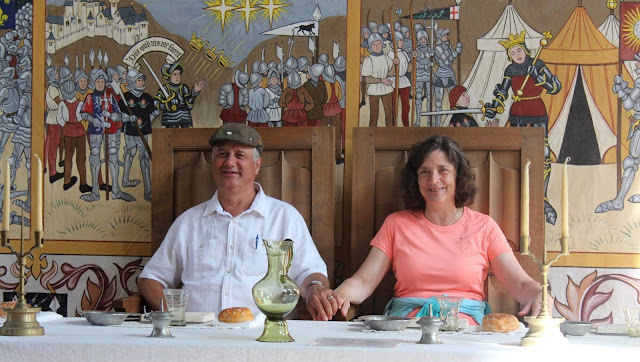 We returned to Tretower last summer and I have been able to convince my wife that our Welsh Heritage is something to be happy about.
__________________
And if anyone wants to read more about the Vaughan Family, you can check out our Family History Blog at: johnelinorvaughn.blogspot.com.
___________________

As requested by Mark in comments below, here are photos from 2010 of the Charles Vaughan monument in the wall at Tretower showing the armorial of the "three boys' heads, couped, having snakes about their necks." (Encyclopedia of Heraldry, by John Burke, Esq., (Henry G.. Bohn, London, 1851)).