Knights of the Air and Sea

On Memorial Day I reflect about loved ones gone and the ultimate sacrifice of our honored Veterans who died in the elusive cause of freedom and protection of their people as a community. War is horrible. And while I remain a temperate pacifist, I actually agree with Grant and Sherman that if war is necessary, then it should be total war to end the horror as soon as possible. I want none of that gentlemanly, organized slaughter where we line up across a field and take shots at the other side under European rules of "civilization.". Now we have the option of ending human life on our planet. And that has tempered the world to avoid all-out war. Yet, one day it could all end by the action of enough crazed people. It will take more than one to push enough nuclear buttons for the full effect of global annihilation.

Having contemplated the absolute horror of war and potential global destruction we see the necessity of avoiding that total war at all costs. Yet, I still find in my heart a human need to respect and honor those who served in the cause or at least the genuine and sincere intent of protection of the lives and the ideals of the people with whom they are united in the community of a nation.


I'm trying to understand how I can see that idealistic nobility in the general futility of war. Fascination gripped me recently spending some hours on the US Midway, a decommissioned aircraft carrier in San Diego Harbor now a museum principally created and staffed by the veterans of the US Navy who served on it or carriers like it.

There are symbols of camaraderie and might turned to idealistic good. On the carrier museum in the midst of patches, plaques, and pictures of the squadrons that trained and fought from our carrier fleet, I found the most interesting symbol of warfare - a crusader sword. 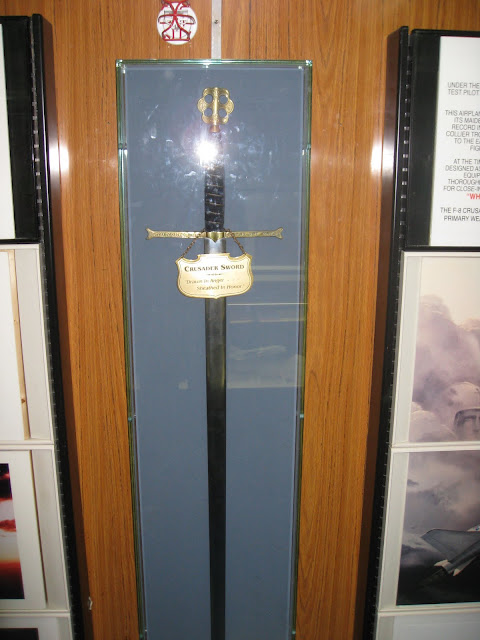 Such an anachronistic symbol of what was not always a noble endeavor must mean something. We all know that the Crusades were horrible as the Christian "jihad" against Islam of the Middle Ages. We shudder to picture the indiscriminate slaughter of Muslims, Jews, and even Christians as the First Crusade was surprisingly successful in actually entering and taking the Holy City of Jerusalem. And they claimed they were on God's errand. So what does it mean?

Not for a moment do I wish to excuse such a slaughter or the arrogance of  religious wrongs too numerous to count. Yet there is something in the deep divides internal to the human heart that does ultimately reveal why a human fights for good or for ill. Alexander Solzhenitsyn said, "the line dividing good and evil cuts through the heart of every human being." And when one raises that sword knowing and accepting full well that he may die by that sword, yet striking in the intended defense of family, home, and sincere religious faith, can't that possibly raise the brutality of the violence into a more noble act?

I don't know that I will ever understand it. And I will keep trying. In the meantime, I do respect and honor those who died horrific and some would say meaningless deaths as faithful soldiers of high ideals in the hope for a more perfect Union of a people united in that hope.

My American flag is flying in the cold breeze of today's Memorial Day.
at 11:00 AM