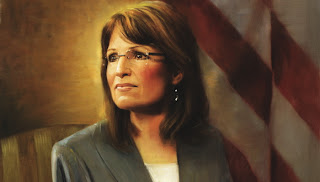 A friend with Alaskan connections referred me to a very good article by Joshua Green from the Atlantic. My friend said that it is very accurate as to how Alaskans thought of her before the 2008 campaign and how she is perceived now. What I really liked about this article was the even-handed treatment supporting my philosophy that there is good and bad in everybody. I admit I've been a little harsh on her, but I have my reasons.

Green's thesis is that she really was a Maverick reformer taking on the corrupt oil & gas powers that be Alaska, but the McCain campaign ruined her by making her the hatchet woman, set off by that well-written if blisteringly rude convention speech. She could have gone forward as a bi-partisan warrior against corruption as she did in Alaska. Yet the hatchet role did fit in with a genuine part of her personality, the vindictive protector of the reputation of her and her family. That's the part I call the "mean girl."

So, where does she go from here? I still think she is waiting for national office to be handed to her because she sort of feels entitled and that it was somehow stolen first by Murkowski, then Obama (and ACORN, the Black Panthers and the "Lame-stre- oh, forget it). She genuinely feels the anger of her "real Americans" against this historically unique president. I do still think she is out of her depth on the national stage. All the hope that she would hunker down and study hard on the issues to prepare for a national political career seem to have been sidetracked by her and her family's TV celebrity status.

While there just might be an opening in the Republican field as they seem to be dropping like flies, I think her position as leader of the tea-partying, anti-Obama-ites has been taken by Michelle Bachman. The public attention has moved on to other shiny objects.
at 9:20 PM