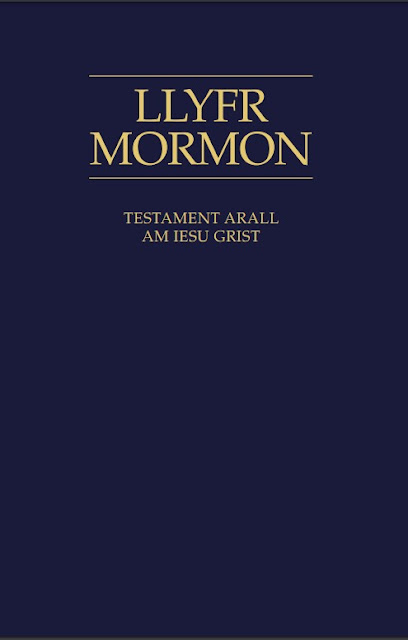 I finished reading Llyfr Mormon, The Book of Mormon in Welsh. My system was not to translate every word or understand every grammatical structure. I simply read it along with the original English translation of Joseph Smith which was done by the gift and power of God. Mine was more for the general sense of it and I cannot deny that I felt the Spirit of God witness in the language of my ancient fathers and mothers.

Yesterday, I worked out a translation of the statement of the presidency of the Welsh Mission at the time of translation, one of whom was John Sylvanus Davis who did the work and printing. This is my translation of their statement with some help from Google. Any mistakes or misinterpretations are mine:

To the Welsh,
Dear Countrymen,- Not without feelings of gratitude to God that we have the honor of presenting this valuable book to the hands of our fellow countrymen. Many of our fellow countrymen have been giving their opinion on the book before ever seeing it and have condemned it. But now, having long been at a disadvantage, they can read it for themselves and see if their former views are correct. We did not do the task of translating and publishing this book of our own accord but by the order of President F. D. Richards who is over us in the Lord. There is no reason for us to condemn this book any more than the Bible for they both speak for themselves for those that love light and truth. Suffice it to say that we know it is a good book and a gift of God, and that whoever will believe and do according to its words will have eternal life. But it is futile to expect all for few walk the narrow road.

With regard to the translation, we can say that it was the best it could have been in the face of the disadvantage under which ordinary translators do not labor. It has aimed for clarity and simple language more than a style of decoration, and we trust that the meaning of the English edition of the Prophet J. Smith is given as accurately as possible. It can be seen by reading the Book of Mormon that the original writers of the plates of old did not profess to be infallible, and in whole, various revisions have been made. And after the Book of Mormon in Welsh has been revised (translated) as much as the Bible has, one can judge whether it becomes more perfect in language. Of course it is easier for others to see faults than it is for a translator to prevent them.

Now, we submit this work to the attention of our countrymen wishing that many of them would believe it and bring them to the knowledge of God and eternal life. God bless all the honest in heart that they through this work together with other means may embrace the Gospel. And may the Saints build in light in the reading of it, that the name of God may be glorified and his purposes fulfilled.

Your humble servants in the truth, 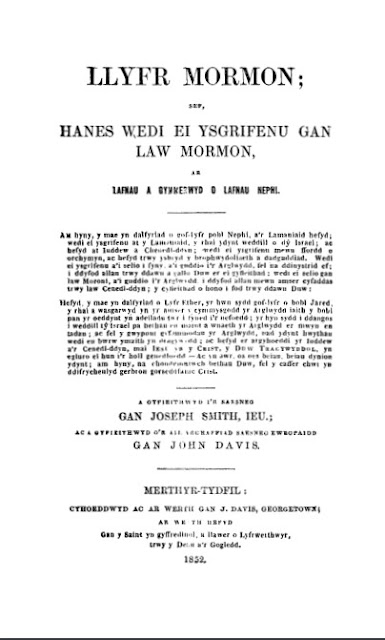