Clicking away to firm up my ancestry.com family tree, I came across a picture I hadn't seen before. 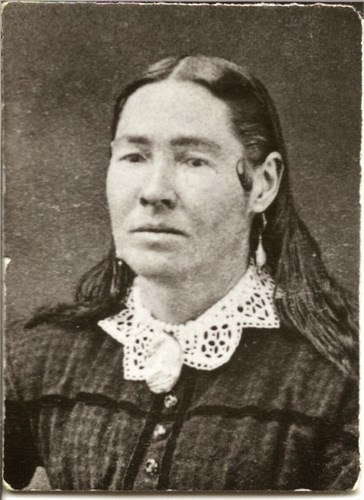 That is my 3rd Great Grandmother, Peninah Shropshire Cotten Wood (1827-1879). She was the mother of George C. Wood (1864-1923), and the grandmother of Addie May Wood (1880-1909). My mom has long taken pride in a claim to Native-American ancestry. Not wanting to judge by someone's looks as in the picture above, I can't help but think my mom is probably right.

The Wood Family story originating with Peninah is that she was the first Lamanite or American Indian to join the LDS Church. Her baptism was 17 February 1833, so that is pretty early. The family story also claims that Peninah's Grandmother, Nancy Fulkerson (1792-1859), was a full-blooded Cherokee.

I've often wondered at the name "Fulkerson" for a Cherokee. The Cherokee Nation was a well-established Tribe having adopted many European customs and names. By legal definition they are one of the "Five Civilized Tribes" that were eventually removed to Oklahoma along the Trail of Tears (Andrew Jackson is now likely paying for this in Heck). There is an Eastern Cherokee Tribe in North Carolina today which is a remnant of those who did not leave.

Going to LDS Family Search to see if there was any documentation for the Nancy Fulkerson claim as a full Cherokee, I came across this note:


Further research should be done re: a Nancy Fulkerson who was kidnapped by indians.

Well, all I could get so far out of an internet search, and I will try other sources when I can get some time to concentrate away from other family lines, was that there is a story of a Nancy Fulkerson captured by Indians in Colonial North Carolina.


Peter FULKERSON...............bpt. 4 July 1731 at Raritan, NJ. He apparently moved to the Virginia/North Carolina border area in the 1750s with his father and siblings. Family history tells us that about 1760 (unconfirmed) he and his family were captured by Indians. The American Pioneer Monthly, published in 1842 and 1843 and afterwards bound in two volumes, contained some articles written by Peter's niece's husband, Major Benjamin Sharp. One article tells us about the fates of both Peter and his older brother: "Richard Fulkerson, an uncle of my wife, and his family except wife and two children, were killed. Peter Fulkerson, another of her uncles and his wife and child, were taken prisoners. Fulkerson himself had escaped and was out of danger, but gave himself up for the sake of his family. They were taken to Ohio and at Chillicothe poor Fulkerson suffered a painful, lingering death by being burned for several days, as the manner of the Indians then was." Years later the Indians released the surviving captives. Peter's wife reportedly returned to 'civilization' but his daughter had grown up in the tribe and chose to stay with them.

Nothing further is known about this daughter, although the Wood family claims that the Nancy Fulkerson listed on one of our Unattached Branches pages was a "full-blooded Cherokee." Jeanettelililan-Wheeler Family History.

Well, now we're back where we started. The stories are inconsistent that Nancy Fulkerson was either a full Cherokee or, assuming that the Fulkerson "daughter" above is Nancy, an American colonial settler captured and then rescued or returned.

We do know that Peninah's mother was Nancy Meredith (1784-1843). Supposedly, this Nancy was the daughter of Nancy Fulkerson the Cherokee or hostage. The dates seem to be mixed up in Family Search.

I did find this in Google Books:


In an early day, at the first settling of Mayo river, now Patrick county in Virginia, the Indians made a horrid breach in that settlement, but I am unable to name the year or month in which it happened. Several families were destroyed and a number of prisoners carried off. Richard Fulkerson, an uncle of my wife, and his family, with the exception of his wife and two small children, were killed; and, although I have seen both their children after they grew up, yet I cannot say by what means they escaped from the massacre. Peter Fulkerson, another of her uncles, and his wife and child, were taken prisoners. Fulkerson himself had escaped and was out of danger, but finding that his wife and child were taken, for their sakes he turned and went to the Indians and gave himself up. They were taken to Chillicothe, where poor Fulkerson suffered a painful, lingering death, by being burned for several days, as the manner of the Indians then was. His widow was afterwards stolen from the Indians and brought in by some man, but I cannot name him; and as for the fate of the child, whether it died, was left among the Indians, or what become of it, I cannot say. When the Indians delivered up all their white prisoners on the pacification after Wayne's campaign, there was one woman advertised for several months, who said her name was Fulkerson ; she had an Indian husband and children, and was in great distress for fear she should be parted from them. She could give no account of her parentage nor where she was taken from, and, as no one appeared to claim her, she was permitted to return to the Indians with her husband. It is more than probable that she was Peter Fulkerson's child, especially as I think it was said to be a female. If you could find any one that could give a full and correct narrative of this affair it would be worth recording, for mine indeed is a very vague one; but I know of no one to whom I can refer you for better information.

Letter of Benjamin Sharp, Warren Co., Missouri, March 3rd, 1843, in The American Pioneer: A Monthly Periodical Devoted to the Objects of the Logan Historical Society; Or, to Collecting and Publishing Sketches Relative to the Early Settlement and Successive Improvement of the Country (John S. Williams, Cincinatti, Ohio 1843), Vol. II, pp. 238-39.

That seems to be the story referred to and this fits with my preliminary theory. I think Nancy Fulkerson was more likely a hostage than a Cherokee. If she was a hostage for some time, maybe even willingly so at some point through "Stockholm Syndrome" or whatever, she may have borne the child who became known as Nancy Meredith and the father was Native American. It seems to me that it would be much easier for a European women to re-integrate into Colonial culture even with some Indian parentage. And Nancy Fulkerson's eventual European husband, James Meredith, would have taken in a daughter of Nancy's even if fathered by an Indian of whatever tribe. Or, Nancy Fulkerson could have been a daughter of the woman named "Fulkerson" with the Indians. Just some theories. Bring on more Colonial Histories!

Bottom line - I no longer doubt that Peninah Cotten Wood was of Native American descent. I think I should print the picture above and hang it in my office.
at 6:28 PM