Last Friday was one of the few LDS Scout meetings after which I didn't have to stay and put away the chairs. But then it was in a fancy hotel in San Diego. My wife was attending the Annual Meeting of the Boy Scouts of America. The only official event I attended was the Friday afternoon LDS reception with President Thomas S. Monson of the Church of Jesus Christ of Latter-Day Saints. Also there were Sisters Wixom and Stevens of the Primary and the entire Young Mens Presidency, Presidents Beck, Gibson, and Ochoa.

President Monson and the others were already on the stand before we came in and there weren't that many before us. It is interesting to watch President Monson. I believe by faith and actions of choice and commitment (in spite of my occasional personal failings) that he is the Lord's Prophet on the earth today authorized to exercise all priesthood keys for salvation. Yet there seems to be an institutional interest to present him as a person to whom respect is due without sliding into anything like a "cult of personality." And an 84-year-old man, even in good health, must be protected to some extent. We, like most others in the meeting, were respectful and reserved enough not to "rush" the prophet. After the close of the meeting there were a few who reached out of the aisle as he walked back down the side of the congregation not far from us. And as he stopped and talked or embraced a few, including one woman he kissed on the cheek motivated by some sort of inspiration, the crowd slowly moved towards him. Still, it was only a few who moved forward (or were forward) enough to shake on hand and pose for a picture with him. 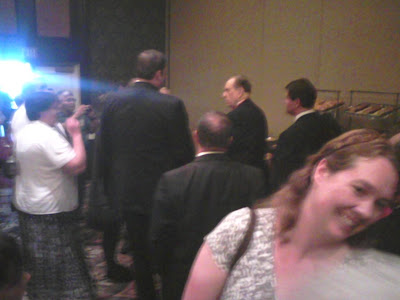 The whole point was, he seemed so real. When he spoke he said he was departing from prepared remarks to be "nostalgic" and talk a little about being processed into the Navy in San Diego years ago. He also talked about when he went on leave back to Salt Lake City for a surprise visit with the girl he had decided to marry. But she had already accepted a date with some other guy and told her sailor that she couldn't possibly break it. So the sailor on leave spent the evening alone and actually drove to sit outside the dance where his girl was with the other guy. He did eventually marry her after his Navy service was at an end, but that story of the lonely night seemed pretty real to me having had similar experiences.

Earlier, Sister Wixom was speaking and bore her personal testimony of President Monson as a prophet of God. She said he was "real." At that moment, President Monson sitting on the stand rolled his eyes in dramatic, comedic aside. That was a very real moment for me.