Maybe he was there, maybe he wasn't, but he has not been officially identified in the famous picture:
It's been a life-long desire of mine to get out to the Golden Spike National Historic Site and I finally did. The problem is that it's not on the way to anywhere, except the Spiral Jetty, which is where the Utah Science Teachers were having an outing. My daughter invited me to go along with her family. And it was fun.
There was a specific question I wanted to ask of the Park Rangers at Golden Spike. It has apparently been asked many times before.

I wanted to know if they had a key to identify the people in the iconic continental connection pic, because my skeptical self had found this on Family Search - Family Tree in the photos for Matthew Bristow Wheelwright, my Third-Great Grandpa:

Well, as I said, the good old NPS was ready for me. They do have a key to the photo hanging up in the visitor's center. And they hand out this nifty little souvenir: 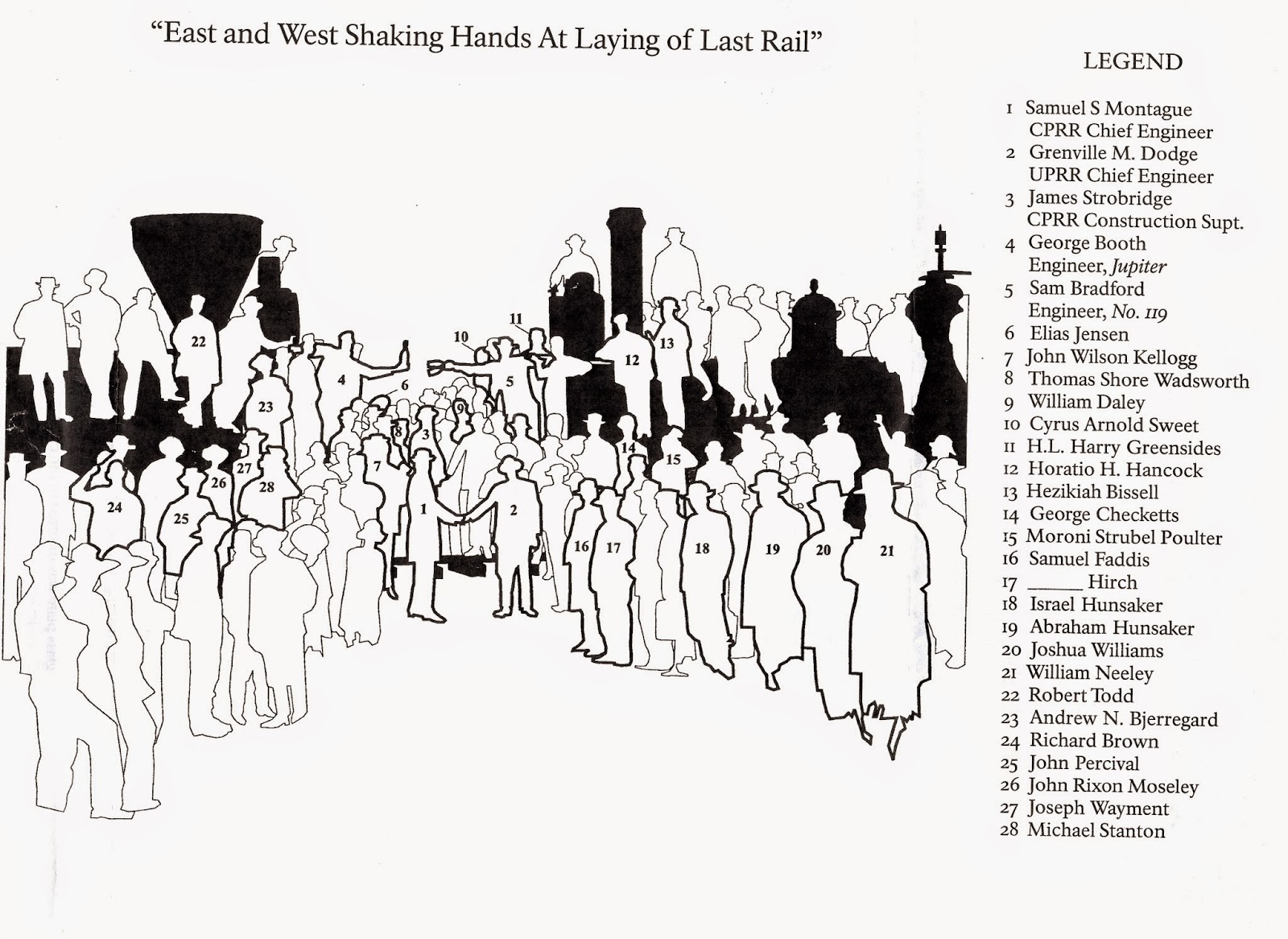 Without revealing my suspected relative, I talked to the Park Rangers about the photo also casually revealing my employment with the Department so I could get any insider's scoop. They said that they have people all the time claim one or the other as their ancestor in the photo. (No idea if they are all Wheelwrights). The Park's process is to identify a person only with adequate documentation that is reviewed by a historian on staff (i.e., provenance). The major governmental Catch-22 right now is that they have no historian on staff because of budget cuts so they have several identifications pending review by a historian they don't have. (Thank you so very much, Do-nothing Congress!)

But that's not the end of the story. Back to Family Search, someone has added a note to the picture with the red circle. It says:

This is Matthew B Wheelwright's son-in-law, Robert Todd III. He was married to Mary Ann Wheelwright, daughter of Matthew B.

So, it is Grandpa Wheelwright's son-in-law circled in red. And checking the NPS key again, there's a Robert Todd identified as No. 22, the same guy as in the circle, so apparently it was good enough for their former historian!

It seems to match for Robert and Mary Ann Wheelright Todd in Family Search. At least it's still in the family. And that's good enough for me!

Please note that there are still a couple of dozen people unidentified. Write your Congressman so NPS can hire a historian at Golden Spike!
at 4:23 PM