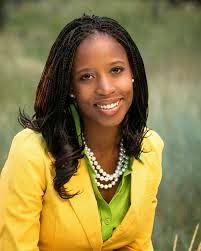 Mia Love, former mayor of Saratoga Springs, Utah County, Utah, is running for Congress in the 4th District. Well, actually, she is walking to Congress with her safe, low profile and Republican brand. She is hoping that the electorate forgets that she was put up by the tea party and lost by a few hundred votes to Jim Matheson last time. So, she avoids controversy and relies on the overwhelming Republican affiliation of Utah's 4th to put her in Congress.

And I heard her on a news report about her appearance in front of a friendly crowd with Mitt Romney as a friendly supporter. She was giving her platitudes on freedom and "government-is-the-problem" which she wants to prove by governing badly. She closed with the idea that they were going to promote "OUR American Dream!" (emphasis in the original.)

Thinking on that, I realized that she is just another Sarah Palin using the rhetoric of division. She was with the guy who said 47% of Americans won't vote for him or take responsibility for themselves (even if it is more like 51% who won't vote for him).

So, I wonder what she means by "OUR American Dream." I think it's the old tripe about the "other" - that the people who vote for her are the true patriots - the federal government and Democrats and Liberals are the "other" that do not share her tea-party American Dream. Anyone who opposes her is unworthy of being a true patriot.

Mia seems to have no interest in serving all the people of her District; just those that buy into her ideology. And, because there is such a large majority of Republicans, she may get that chance. She is not her own person. She is controlled by big money interests that want to see the regulatory power of the government diminished so they can have more big money. And I admit, a lot of individuals have bought into that philosophy with misplaced concerns about their own sweet moolah.

I like Doug Owens because his dad was a great Representative and because I know his younger brother, who is also a government civil servant who puts his life on the line in the law enforcement arena to make us all safer. There is reason to believe that Doug Owens is willing to represent all in his district - respecting different philosophies and working with those in any party or with any ideology to accomplish good. That's what I call Patriotism and the American Dream.