The Law Is an Ass 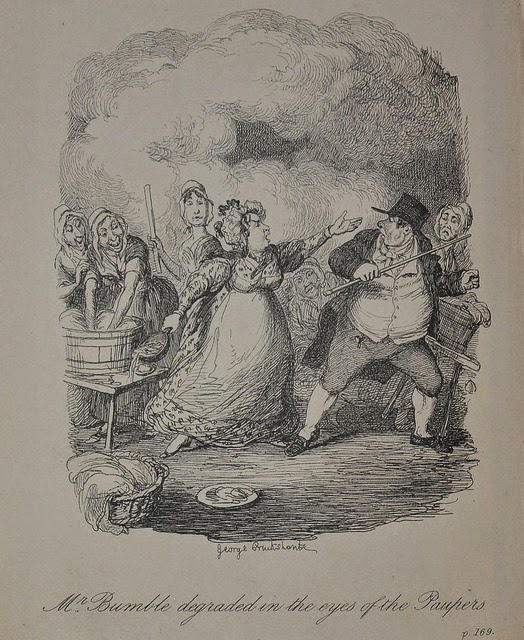 Thinking today about traditional marriage, I read an article about how short-lived our modern concept is. It wasn't that long ago that the Western concept of marriage was that the married couple was a single unit and that unit was the husband. A married woman generally had no legal rights separate from her husband. It was almost as bad as chattel slavery in human beings. We've come a long way, Baby, and I don't think we want to go back.


These thoughts lead me to the passage from Charles Dickens's Oliver Twist when Mr. Bumble and wife were finally caught in their knavery:

'I hope,' said Mr. Bumble, looking about him with great ruefulness, as Mr. Grimwig disappeared with the two old women: 'I hope that this unfortunate little circumstance will not deprive me of my porochial office?'
'Indeed it will,' replied Mr. Brownlow. 'You may make up your mind to that, and think yourself well off besides.'
'It was all Mrs. Bumble. She would do it,' urged Mr. Bumble; first looking round to ascertain that his partner had left the room.
'That is no excuse,' replied Mr. Brownlow. 'You were present on the occasion of the destruction of these trinkets, and indeed are the more guilty of the two, in the eye of the law; for the law supposes that your wife acts under your direction.'
'If the law supposes that,' said Mr. Bumble, squeezing his hat emphatically in both hands, 'the law is a ass—a idiot. If that's the eye of the law, the law is a bachelor; and the worst I wish the law is, that his eye may be opened by experience—by experience.'

From the even more sordid aspects of the old ways that are still ongoing, FactCheck confirmed a recent statement of Gloria Steinam:


More women were killed by their husbands or boyfriends since Sept. 11 then "all the Americans who were killed by 9/11 or in Afghanistan and Iraq."
— Gloria Steinem on Wednesday, October 1st, 2014 in an AP interview

When I was bishop, I had to deal with such issues. Yes. I did call the police.

We have a lot of work to make our more perfect union both in our marriages and in our constitutional ideals.
at 10:27 PM