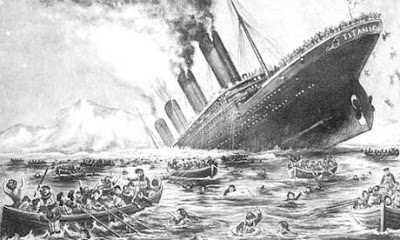 I never saw the movie. There are a few cultural icons I refuse to participate in just to keep myself uniquely independent and unspotted from the world. I've never seen a single Rocky or even a Jaws movie either.

But I do join the general cultural condemnation of Celine Dion's song. Yuck.

I read this article today by Carl Wilson in the Atlantic all about the lack of love for Celine's famously annoying song. The shocker came when he linked to the original version of a folk song popular from the 1920s. By at least the 1960s, it had degenerated to a Scout campfire song which has now lost out in the P.C. wars. The words were a little different except for the chorus including the alternate version also quoted by Carl. He must have been at Camp Parsons in the late 60s to early 70s.

Here's the version we used to sing as I remember it:

Oh, they built the Ship Titanic
And they built her out of steel
And they said no storm
Could ever break her keel
But the Lord He raised His hand
And He said, "She must not stand"
Oh, it was sad when the great ship went down

Oh, they were off the coast of England
A headin' 'way from shore
When the rich refused
To mingle with the poor
So they sent 'em down below
Where they'd be the first to go
Oh, it was sad when the great ship went down

Oh, they put the life boats out
On the cold and stormy sea
And the band started playin'
"Oh nearer my God to Thee"
And the First Mate tried to wire
But the lines were all on fire
Oh, it was sad when the great ship went down.

[last verse sung very slowly and sadly]
Now because of this great
And fateful tragedy
A mighty Coast Guard Cutter
Now sails those northern seas
And every now and then
They pass o'er that spot again
[back to tempo]
Oh, it was sad when the great ship went down!

[extra, very irreverent verse]
Oh, they built another ship
And they named her Mary Jane
And the bow and stern
Were painted just the same
Oh, they christened her with beer
And she sank right off the pier
Oh, it was sad when the great ship went down

Chorus [more rollicking than ever]


If Celine would only sing that song, I would go see DiCaprio turn blue in an instant.
at 8:00 PM