My OPF (I think that's Official Personnel Folder) is all digital now. Checking a new entry, I went back to see what the first document was in there. I guess it is no surprise that it's my Oath. 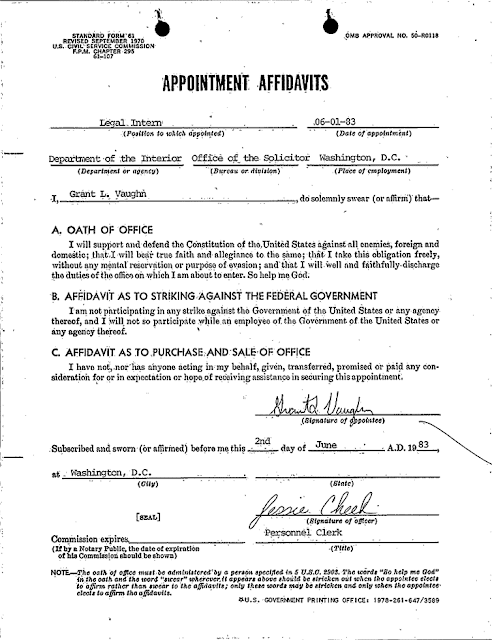 Last night we watched "All the President's Men" which I haven't seen for a while. It was especially interesting to watch now that "Deep Throat's" identity is known. Redford as Woodward makes a couple of references early on to the FBI and it's likely that Mark Felt was the source. Felt even looks a little like the mysterious character in the parking garage played by Hal Holbrook. Then I was paying close attention to Woodward's early phone calls and he speaks with a "Mr. Bennett" who is our former Senator Robert "Bob" Bennett who gave Woodward the info that Howard Hunt had worked for the CIA.

The movie ends with Woodward and Bernstein furiously striking their electric typewriters while Nixon is taking his oath of office. Then the teletype machine batters out the headlines of numerous individuals convicted - ending with the resignation of the President who failed his oath. 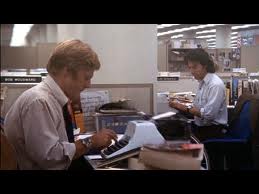 That oath is very important and sacred to me. All those in federal service take it whether civil or military. My civil service position has not required me to train in the use of weapons to defend the Constitution. But I still do it civilly nearly every day as I advise those who work for my client, the Secretary of the Interior, to act within proper legal authority under Congressional Statutes established by the Constitution as the supreme law of the land. (U.S. Constitution, Art. VI). Oh, and in my private time, I have this blog where I can be a little more philosophical and political letting my digits fly mightier than any sword.

Thoughts of the oath remind me also of the movie "Clear and Present Danger." Harrision Ford as Jack Ryan goes in to see his National Security boss played magnificently by James Earl Jones who is dying in the hospital. The first time I saw that movie I nudged my wife as they began their serious talk about what the Ford character had discovered of the President's illegal activities. I blurted out to my wife, "He's going to talk about the Oath!" Sure enough. Here's the clip:


Yes. I gave my oath to the People of the United States for all the purposes of the more perfect Union for which we strive.

Tomorrow we're planning on seeing the movie about our greatest President who honored that oath in the midst of the most extreme circumstances resulting in a new birth of freedom for all the People of the Constitutional Union.
at 5:00 PM