My wife is a Science Teacher. She used to teach Math. She's a lot smarter than I am in these areas. In fact, that applies in almost every area. The smartest thing I ever did was to marry her. Our kids do pretty well with Math. They get that from their mother. So far, none of them want to be a lawyer. They get that from me.

Math has always been a problem for me. I'm smart enough, but still struggle with the Math Anxiety I developed in Mrs. Sather's class at Finn Hill Jr. High when she introduced something called polynomials. I've been lost in Mathematics-land ever since.

It's nice to have a wife I can trust and I son who has a Master's in Statistics from Virginia Tech. It comes in handy when I'm trying to figure out the political polls. So I trust the Statisticians with good, solid, academic training as well as proven track records. I've linked a couple of them over at the side like Nate Silver and the Princeton Election Consortium (I mean, Princeton, for heaven's sake! Those guys aren't dumb!) Nate Silver was right on in 2008. Back then I was also following a similar aggregation of polling that was done by a professor at BYU assisted by a student, my son. They did pretty well too only missing Indiana for Obama.

So I've been interested in the current accusations from the right that these Science and Math based Statisticians are somehow cheating or skewing the polls to favor the President. Sure, statistics can be manipulated, but I'm not seeing it here. I was reading one of their defenses the other day at Votomatic and looking at things I don't really understand about standard deviations and stuff and a light bulb popped above my head! I knew what they were talking about! It was that thing with the balls dropping down in front of the Science Pavilion at the Seattle Center (remnant of the '62 Seattle World's Fair). Doing a little internet searching, I discovered this is called a Galton Board. It creates a Bell Curve that any college student should recognize as the seemingly arbitrary way that grades are distributed - as in the dreaded "graded on a curve." There's an even cooler animated version of this at the University of Kentucky site where I found this. 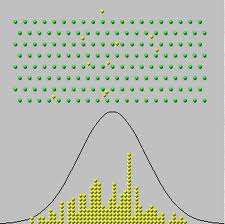 Now a "bell curve" analysis of the distribution of variations in multiple polls does not mean that it's impossible for Romney to become President even if Nate Silver says it's only about a 20% chance. It could still happen, it just isn't that likely. It's a 1 in 5 chance. And Silver's analysis is cautious and conservative. The Princeton Education Consortium currently gives the President a 99% chance. Yikes! that means Romney can still win, he's just that one little ball on the far right. All the rest are the President's chances.

My son's probably going to comment in here to explain in more scientific terms what I'm trying to say or what I got wrong. Supposedly Joe Scarborough on MSNBC's Morning Joe joined in the right's excoriation of Nate Silver the other day saying that everybody knows that Silver has to be wrong because the polls show the race practically tied. At best the President has 50.1% support in the polls so it's crazy to say he has a 73.6% chance or so to win. Come on, Joe! Even with my Math phobia I can figure out that a 73.6% chance of winning 50.1% of the vote are two different things. (Not to mention winning the higher percentage in the right states gives a solid win in the Electoral College). My confidence is in competent statistical analysis and the President's re-election.

Maybe that little boy standing outside the Pacific Science Center watching those balls drop to form the eternal bell curve shouldn't have been so afraid of Math.