General Petraeus Did Us a Favor

The adultery and fallout are tragic events for the Petraeus Family and not helpful at the CIA. And then there's the whole Benghazi mess to straighten out only because the right has stirred the pot so badly and unnecessarily to discredit somehow the Obama Administration when it was their own presidential candidate who embarrassed himself so badly (the 47% tape, the night of the attacks, and Debate II).

General Petreaus accomplished great service to the country. Yet he proved himself human and resigned with the President's encouragement. Tragic, yes. But this helps restore and reinforce civilian control over the military - a very important part of our constitutional law and tradition.

The President, a civilian elected principally by civilians, is Commander in Chief of the Armed Forces. That creates a protection from a military leader who could be tempted to assume dictatorial powers over a nation as frequently happens in other parts of the world. The Founders were aware of this from European History but more profoundly from classical history in the dissolution of the Roman Republic by victorious generals who became emperors.

It rather concerned me when the last President kept talking about making important decisions about war "by listening to the generals on the ground." We hear that from a lot of conservative voices about how generals should be in charge of war. Sure, the everyday tactical and even strategic planning, but it is the President who makes the ultimate decisions about the policy of war. (And it's the Congress that should declare war but we'll leave that for another day.)

We should see some of this in the movie "Lincoln" because that President was heavily engaged and involved in managing that war to put down rebellion, at least until he found the generals he could trust in Grant, Sherman, and Sheridan. Yet he still frequently consulted with them and engaged in the decisions as to how to proceed and ultimately bring more freedom, civil rights, and peace in the place of rebellion.

It also brings to mind a civilian president, formerly a haberdasher from Kansas City, who had to fire a "great" general who took too much hubris on himself to the point of risking a Third World War involving nuclear weapons with Communist China. Check out this picture:

Notice the body language indicating who was in charge here - not the conqueror of the Philippines, the Military Governor of Japan, or the Hero of Inchon - but the Haberdasher from Kansas City. It reminds me of more recent photos:

It appears to me that the former community organizer and law school instructor is in charge, not the hero of the surges in Iraq and Afghanistan. This gives me much more comfort about civilian control over the military than what we saw with the last President. 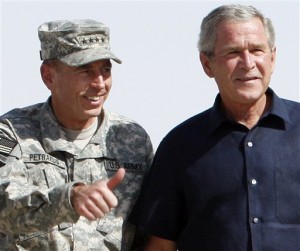 Petraeus's tragic and human fall from grace, especially on one of those "family value" issues so important to the right, should help deflate a little of the deference to military heroes who work for us civilians. This is an important correction to the war-emphasis of the last President along with the fact that our current President has extracted us from one war we never should have been in and working on getting us out of the other more necessary war that should have ended years ago.
at 9:54 AM