Secretary of State Clinton is a very popular and successful member of the Obama Administration. She is so popular that even Republicans claim to love her, as in, "if only she had won instead of Obama!" Take that for what it's worth.

The classy thing she did was to fall on her sword over the Benghazi attack. She claimed full responsibility and that the President and Vice President didn't have any reason to know about any requests for increased security. This is clearly a political attempt to deflect the Republican attacks against the President on this. Of course the ultimate buck stops with the President and her deflection will only work to a point. Yet I'm sure Secretary Clinton, along with many others, is more concerned about the tragedy in Benghazi becoming a political football in the closing weeks of this election. We will eventually know the truth of all this yet it will take some time. Now comes the classless part.

An overlooked portion of the infamous 47% recording involved a comparison to Reagan and the advantage he had talking tough about the hostages in Iran. The dialogue went like this:


Audience member: If you get the call as president, and you had hostages…Ronald Reagan was able to make a statement, even before he became, was actually sworn in—

Audience member: the hostages were released—

Romney: on the day of his inauguration, yeah.

Audience member: So my question is, really, how can you sort of duplicate that scenario?

Romney: Ohhhh. [A few chuckles in audience.] I'm gonna ask you, how do I duplicate that scenario.

Romney: I appreciate the idea. I can't—one of the other things that's frustrating to me is that at a typical day like this, when I do three or four events like this, the number of foreign policy questions that I get are between zero and one. And the American people are not concentrated at all on China, on Russia, Iran, Iraq. This president's failure to put in place a status forces agreement allowing 10-20,000 troops to stay in Iraq? Unthinkable! And yet, in that election, in the Jimmy Carter election, the fact that we have hostages in Iran, I mean, that was all we talked about. And we had the two helicopters crash in the desert, I mean that's—that was—that was the focus, and so him solving that made all the difference in the world. I'm afraid today if you said, "We got Iran to agree to stand down a nuclear weapon," they'd go hold on. It's really a, but…by the way, if something of that nature presents itself, I will work to find a way to take advantage of the opportunity.

Did you get that? Check out that last line again in the context of the two rescue helicopters crashing in the desert or an Iranian bomb, "if something of that nature presents itself, I will work to find a way to take advantage of the opportunity." Well, that explains his rush to the statement that night before we even knew our Ambassador was dead. Classless opportunism.

I remember that day the helicopters crashed in the desert. The country was already in horrible apprehension counting the days, ultimately 444, that our hostages were held in Iran. I was home from school working, waiting anxiously for the day my wife and I were to be married. I got up that morning and came out to where my parents were already watching the TV about the disaster in the Iranian desert. President Carter spoke to the nation about the tragedy. We were devastated.

We all ended up voting for Reagan that November even if I was still holding out hope for G.H.W. Bush. At the time of the tragedy, in late April, Reagan and George H.W. Bush were still competing for the Republican nomination. The country was united in support of the hostages and the brave men on the rescue mission. Any thought of how this foreign disaster could effect the election never crossed our minds. It crossed the minds of Reagan and Bush in this manner:

Former California Gov. Ronald Reagan told reporters it wouldn’t be appropriate for him to express an opinion at that time. “This is the time for us as a nation and a people to stand united” and to pray, Reagan said, according to United Press International.
George H.W. Bush, also campaigning for the Republican presidential nomination, went further. “I unequivocally support the president of the United States — no ifs, ands or buts — and it certainly is not a time to try to go one-up politically. He made a difficult, courageous decision,” Bush said in Michigan, UPI reported.

Classy. Maybe that's why in those days I was still a Republican.

We'll see how classy Governor Romney is with this Benghazi issue tonight.

ADDENDUM
Later, post-debate:
I called it. The Karma of Romney turning the Benghazi attack into crass political opportunism caught up with him. Even Candy Crowley called him on it. Ryan and Romney have been lying that the administration did not call it a terrorist attack for two weeks: 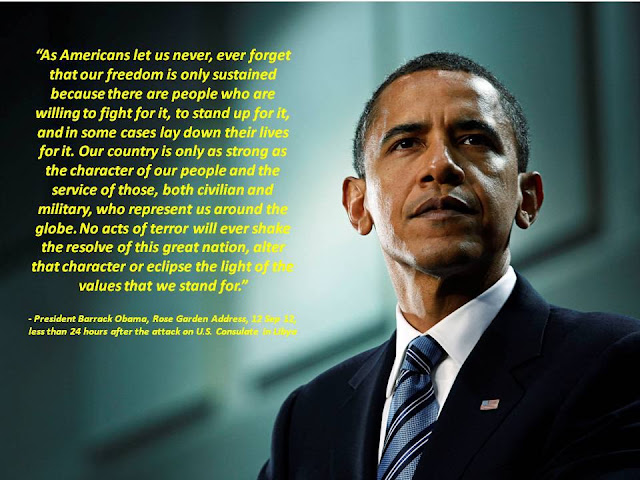