Trying to avoid stirring too much controversy the closer we get to the election, and on a peaceful Sunday morning at that, I thought I would share pics of my campaign button collection. Clearly, I'm not one of those disturbed individuals who has a collection of either elephant or donkey figurines to the exclusion of the other.

The collection started in 1980 while at University (British talk). It was actually BYU where I started my shift from a solid moderate Republican to eventually becoming a moderate Democrat - such a drastic switch! I collected the Reagan, Carter, and even John Anderson buttons at the Wilkinson Center booths for the various candidates. After that, I made the point every election cycle to visit the campaign offices of the various parties to collect a button. The Dems usually handed them out for free. I usually had to pay a buck to the Republicans to get a button - no free lunch with them!

While in Santa Fe, we often visited the quaint little town of Cerrillos that had a great antique store that sold old campaign buttons. On our trips down there with tourist guests I would pick up an item from the past.

Then, in more modern digital times when I discovered E-bay, I figured it was time to fill out the collection so I bid on some desirables and occasionally was a lucky bidder to snatch them up. Once I even got a whole set of Humphrey buttons for cheap - apparently as the sole bidder.

Also hanging there is my delegate credentials to the 2010 Utah State Democratic Convention. That sort of blows my bi-partisanship, but it was a blast! I ran into my uncle who was a delegate from Washington County and a friend from Cache County so I have Dem friends from one end of the state to the other (all three of us!)

Here are some close ups of some of the prizes in the collection: 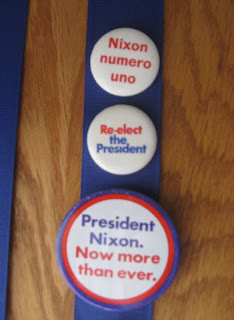 You have to admit, "Nixon numero uno" is pretty funny on several levels. The infamous logo "Re-elect the President" invokes the acronym of the Committee to Re-elect {"CREEP") with all that Watergate entails. What a classic story! And even "Now more than ever." is rather poignant as we learn of the passing of a true American hero, George McGovern. Well, my sentiments are coming out in spite of myself. 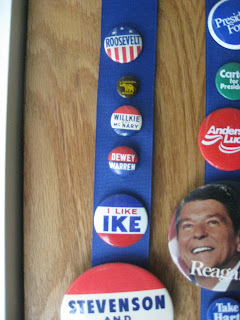 So going far, far back as I go, I picked up a classic button for FDR and a couple of his challengers. That really small one is actually Alf Landon.

And then note the Dewey one with Warren. That's Earl Warren, Governor of California, Appointed to the Supreme Court by Eisenhower to heal wounds between Warren an Nixon as Californian contenders. And Warren went on to lead a rather progressive Court.

So now we come to the current campaign. My Obama buttons finally came from "Obama for America" which counts for a token donation. And the Romney one came from Amazon (so as not to contribute directly even a couple of bucks. I suppose I ought to find a Gary Johnson button. After all, he isn't a Mormon. And I have met him. Guess I'll have to check out Amazon or E-Bay. 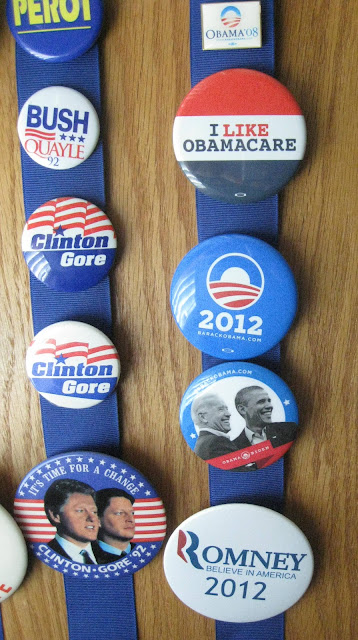