OK, I wasn't going to do any more autopsies, but I found the best map ever showing the United States of Purple. It was from an Atlantic piece explaining why city voters tend Democratic and is a really good read. It's a little more complicated in the busy industrial, commercial, and population centers than lazy people sitting around waiting for free stuff. 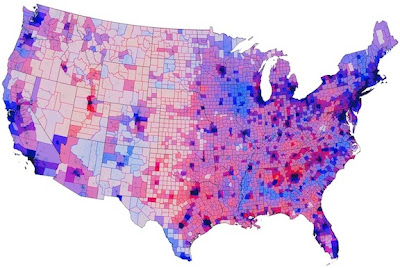 As the article explains, the red and blue are by county but with vibrancy of color relative to population. This tends to reflect better why the Republicans are not a majority, and how at least in this election cycle the United States, while still with a centrist or purple tinge over all, leans slightly left - not right of center.

I live in a bright red area, Davis County, just north of Salt Lake County in Utah. But notice the deep blue of Salt Lake County where I work (and have many friends and relations, some of whom are actual Democrats). There is the purplish Summit County (Park City) heading off to the corner of mostly light-pink Wyoming and the ultra-red of Utah County to the South. (Better dead than red, comes back to bite Provo/Orem).

And I have one more question for those who-shall-not-be-named who think Obama won because he promised a lot of free stuff to lazy people: Didn't it take at least some initiative and sense of personal responsibility to face down attempts at voter suppression and go wait in line for hours on end to fulfill the sacred civic duty of voting? I mean it's not like they sat around wasting millions of dollars supporting candidates who didn't win who could have given more free stuff to those who already have a lot. Now that's what I call lazy.
at 4:48 PM