My Open Letter to the NRA 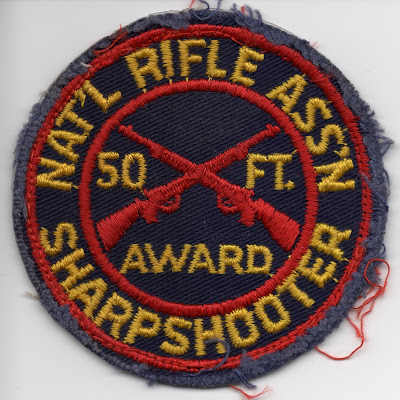 This is a picture of my NRA Sharpshooter badge I was so proud to earn at Scout Camp in 1971. I love target shooting. Always have. I never was a hunter except for pheasant with my 20 gauge shotgun. I am a gun owner but not an NRA member. If I were a member, I would resign. And I am seriously considering getting rid of my two guns. I don't even want them to go to any other person as I would hate to have them used as tools for blowing holes in some living thing, possibly a human. They are tools made for that purpose after all.

The Sharpshooter badge appears a bit ragged because I ripped it off the backpack that I've had since I was a Scout. I had my Mom sew it on there along with my 50-miler awards. While still proud of earning that badge and grateful for the NRA contributions to assist the Boy Scouts in training me in my youth, I no longer wish to be associated with the NRA in any manner. I have that patch hidden away in a box with other old memorabilia. I will not destroy it or send it back to you because of my optimistic hope that even the NRA can change.

A lot of us had that hope in the week after 20 young school children in Connecticut were shot by an apparently crazed individual with weapons capable of firing off multiple rounds of flesh-piercing metal at a rapid pace. We were hoping that your news conference would offer up some common sense safety proposals to help decrease such horrific tragedies.

Your proposal to any problem with guns is more guns. If you can't see the illogical idiocy of that position, there is no way I can convince you. It appears that you may be operating as a shill for gun manufacturers to increase profits at the cost of human suffering much like big tobacco's schemes that were ultimately exposed.

You stuck to your guns with the idea that the Constitution somehow prevents any restriction on private gun ownership. It's pointless to argue the Constitutional issues as it is so easy to interpret the odd language of the Second Amendment any way you want even if it does refer to a militia and actually uses the words "well regulated." While the quartering of troops in the next Amendment has become historically irrelevant, your favorite Amendment apparently never will. All I can say is if it does mean what you and some of the conservatives on the Supreme Court think it does, then it ought to be amended. The people, all the people, of the United States will resolve this eventually. And it will not be in a hail fire of bullets raining through the air. This must and will stop.

You are on notice, NRA. We the people will not tolerate this. There are more of us than there are of your members and we're not afraid of your arms. If you want a second Civil War remember how that turned out for South Carolina and the other rebellious states. They believed property rights in human beings were more important than any other principle of America's founding including the fundamental that "All Men are created equal" You seem to forget that your "tool" of a gun is to serve the Union in well-regulated militias. It does not trump the fundamental rights, including those of 20 children snuffed out by your tools, to Life, Liberty, and the Pursuit of Happiness.

Shame on the NRA.

A report on lobbying money spent by NRA (not the voice of the people) can be found at OpenSecrets.org: Center for Responsive Politics. The NRA website states its membership as "nearly four million members." That is a very small percentage of the people of the United States for the power they wield through the mighty dollar in Congress and Presidential and state elections. They are the classic case of special interest lobbying - not the voice of the people.