Latest News on the Fiscal Cliff 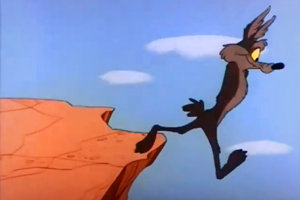 Yesterday, I was at an Eagle Scout Court of Honor and at the refreshment table, some very conservative friends started up a conversation on the fiscal cliff. (Remember, I live in south Davis County, Utah and was at a Boy Scout function). There was no mention made of the President but there was a lot of talk about the irresponsibility of Congress and this rather surprising statement from my friends, "I don't see why there's any problem with raising taxes a little on the rich."

Encouraged but cautious, I launched into some of my philosophy on the imaginary nature of money and how it only has value that we give to it in a strong market of exchanging goods and services. I spoke of Teddy Roosevelt and even the Founders how they had no interest in establishing an American aristocracy by inheritance or extreme wealth as in our Mother Country [slavery excepted]. I even broached the philosophy of Keynsian economics. I was surprised at how well I was received as they know full well that I am a member of the Democratic Party (i.e. spawn of satan). But they are good friends and good people.

Today, the President said that the fiscal cliff talks were held up on the one Republican priority, no tax increases for the wealthy. The Republicans are failing at any better message for their cause - CPI index, everything else all still negotiable. Senator Graham (R. SC) admits the President is winning the political battle even if it is a hollow victory because the problem is not solved. Senator Reid has also failed to come up with a Senate compromise that could be pushed on the Dems and a few Republicans in the House. Sen. Reid has one more chance tomorrow and I hope somebody is working all night. But it is almost certain we're going over the cliff.

My only hope is that come January 2, after the automatic tax increases go into legal effect, that the Republican tea partiers in the House will realize that they can then vote for a tax decrease so as not to violate their most deeply held values.

I hope it's not just a tax cut mostly for the benefit of the rich supposedly to trickle down to all us peons.
at 5:28 PM