Over the Cliff But Safe in the Middle

And the Republican Party crashes on the rocks. 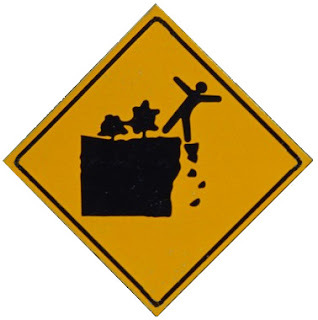 A stray comment I saw on a news site got me thinking. The President is holding all the cards and he is going to play them. For the good of the country as a whole he will teach the Republicans and the whole country a hard lesson. There are important aspects of government that need to be paid for, and paid for fairly. There has to be a tax increase on those most able to pay and serious cuts in our government services for all to understand what is important to us. So, we're going over the cliff.

But, there was that comment. Suppose the President by Executive Order directs the IRS not to collect the automatic tax increase resulting from the expiration of the Bush cuts on the first $250,000 of income? He just exercised Executive power rather brazenly (and successfully) in ordering a partial implementation of Dream Act principles by ordering no deportation of children of undocumented immigrants who meet certain conditions. With an Executive Order on who gets taxed, more taxes would be collected on income above the first $250K and automatic spending cuts would go into place until the People whose government this is supposed to be of, by, and for, get the picture and demand responsible tax, spending, and entitlement reform as well as infrastructure boosts to the economy for the middle class and less advantaged - not just the wealthy and corporations to trickle down to the "underclass" as some Republicans define the working poor.

Promote our markets by giving them a little nudge. That sounds so much better than "stimulus" one of the words made naughty by Republicans along with "health care," "bail-out," "well-being" (i.e., "welfare" - see what I mean?), and "government" itself.

It will still be ugly. And it may be ugly until the 2014 mid-terms and maybe beyond. If the Republicans cave to the President, they will be challenged in primaries from the right, wrong and loud as the minority right can be. If they don't cave, We the People will not be happy. The Republicans will also be pressured by their corporate and banking constituencies, and the whole military-industrial complex, not to go over the cliff and cause economic havoc. So maybe there's still a chance . . . .

People of the United States! - We the People - need to take back our government from a majority in the House of Representatives and a political philosophy that does not believe in government. At least that's what they say. They may think government is just fine when it is taxing the middle class and working poor to pay for tax breaks for the wealthy and corporate interests that only trickles back to the middle so that we in the middle class - and even the poor - can pay more taxes to keep the cycle going. But some few are getting fat and many more only get trickled upon.
at 8:48 PM