It's Not Grover Cleveland! 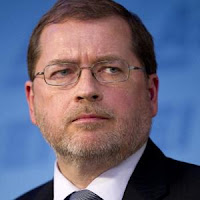 One of these is a furry monster, the other is a character on Sesame Street. One is a no-tax lobbyist who wants to shrink government small enough he can drown it in a bathtub. The other wants little kids to take baths. One refers to "poopy-heads" and "impure thoughts," the other teaches good manners to young children. One controls the Republican Party with a series of pledges at least as strong, if not stronger, as the oath to uphold the Constitution. The other is a puppet.

One of my favorite books to read to my little kids was "There's a Monster at the End of this Book." It had the bluer version of Grover pleading with the reader not to turn the next page becoming more and more desperate and anxious (my voice becoming louder and shriller) as the pages were turned in spite of every effort to nail them down or brick them up. At the end of the book was little, old, lovable Grover - not the one trying to destroy the government of, by, and for the People.

And I intend the Lincoln reference on purpose. Is it just me? or have others noticed that the politicians most beholden to the furry Grover with the glasses are extreme conservatives, mostly southerners? I think there just might be a problem  with the anti-government philosophy as the illegitimate child of slavery, segregation and general prejudice of Blacks and Hispanics believing that "gummint" is taking other people's money to waste on these people. Regardless of the relative benefits or detriments of any social program, these conservatives and southerners apparently fail to recognize all the services and benefits they get from our government and the billions and trillions of tax dollars that go to the corporate interests, especially the militarily-industrial complex.

They also believe like the truly scary Grover that "government is the problem" failing to respect the ideals of Lincoln and this:


We believe that governments were instituted of God for the benefit of man; and that he holds men accountable for their acts in relation to them, both in making laws and administering them, for the good and safety of society. D&C 134:1.

Did you get that? Government instituted by God for the benefit of man! (and women). And we're responsible for it! "for the good and safety of society!" I don't see anything about government being the problem there. Or that we favor one section of society over another (military-industrial complex, the wealthy, and other corporate persons over the disadvantaged). If there is a problem, it's us - We the People.

Yes. This is a repeated theme with me. I will keep on repeating it as my civic oath is to defend the Constitution of the United States blessed by God for the benefit of mankind.
at 5:43 PM