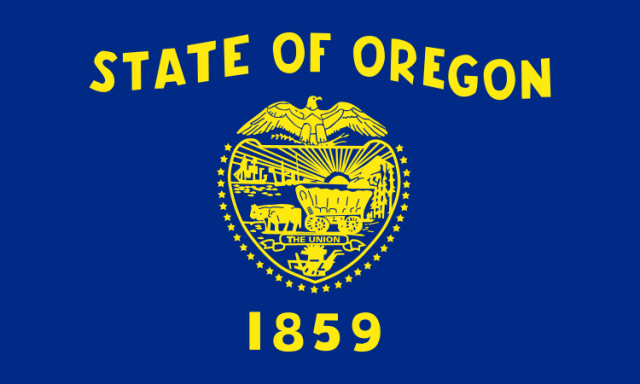 While one of the typically bland gold on blue flags common to many states of the Union, the Oregon flag has some unique characteristics. The covered wagon pulling oxen would seem obvious from the famous trail. And there is a hint of evergreens and agriculture along with the golden sunset into the Pacific with an old sailing ship and modern (for the day) steamship.

But note the year prominently displayed. That gives a clue to the important slogan on the scroll "The Union." Yes, Oregon was established as a Free State for Free Men [and Women] in defiance of the interests who would spread slavery into Western Territories to become Slave States furthering the power of Southern Slave lords who practiced "the Divine Right of Kings." As Lincoln put it, "You work and I'll eat the bread."

The flag is also unique for having a different backside. It's the Oregon Beaver with historical significance due to the fur trapping industry and the Astorians (with an Oregon city named for them). And the beaver is every bit a symbol of industry as the honeybee of Utah.

So, how did this flag nearly get me into a duel? Well, it was in South Carolina.

The Palmetto State is an interesting place. I've visited Columbia a few times because the Department of Justice has a national training center there. Sometimes they invite attorneys from other federal agencies. I've even been on a panel once about complex settlement negotiations (successful land exchanges among the Forest Service, BLM, the City of Los Alamos, DOE, and the Pueblo of San Ildefonso).

I enjoyed visiting and seeing some of the historical sites in my limited time (never had the chance to get to Charleston, though). Anyway, friends from my office - from our installations all around the country, and our local U.S. Attorney's Office would hang around together. Only one of us sort of a Southerner from Oklahoma, we were generally amazed at the Confederate Culture still prominent. There is an old cemetery right downtown with gravestones of names like "States Rights Smith." They named their son, "States Rights?" (Was that "States" for short? or maybe just SR?) And there was the ongoing controversy about the Confederate battle flag and monuments to heroes, including one to Strom Thurmond put up by his children (except there was no mention of the illegitimate one he had by his former African-American nanny).

And I wasn't the most belligerent anti-Southerner in our group. One of our Assistant U.S. Attorney friends from New Mexico (raised back East, apparently north of Mason-Dixon), stood on the veranda of the training center, genuinely furnished with rocking chairs, and stated, "If the South had won the Civil War, South Carolina would be just another banana republic." Probably true, but "yikes!"

So there we were in the very nice dining hall and my friends were asking about my background and why I was so pro-North about the Civil War. I explained that my ancestors had been relatively neutral in Utah (technically a Slave Territory which should be much to our shame) [Utah Territory did provide some troops for the Union], but that I was born in Oregon and I started to explain about the flag above. Here's a close up view of the shield with the "Union" motto:

When I got to the part about "The Union" banner, a well-dressed, aristocratic gentleman from the next table stood up and said, "Sir, I'll have you know that I am a son of the Great Commonwealth of Virginian and on our flag it says, 'Sic Semper Tyrannis!'" Stunned, but not too intimidated as the dapper little man was not that large, I blurted out, "Isn't that what Booth said when he shot Lincoln?" I suppose the proud son of Virginia must have been some kind of federal official or he wouldn't be there, so perhaps coming to himself and his allegiance to the Constitution of the more perfect Union, he sat down. We northern sympathizers just looked at each other in stunned silence.

Good thing dueling has long been prohibited under federal and I assume most state law.
at 10:57 AM