Have you ever felt that your ancestors are watching you? I was startled yesterday when a photo popped up with an ancestor staring me down. Maybe he'll do the same for you when you click on "Read more" below.

I am amazed to see the new resources on New.FamilySearch, particularly the Family Tree that is much more navigable and has links to source materials, histories, and photos that people have uploaded. I was playing around in there when Grandpa Rice jumped up. This was the guy born in Manchester, New York when the Smiths lived nearby. His family joined the church in Michigan and went to Nauvoo where Grandpa married Lucy Witter Geer and received their own ordinance work in the Temple. They were pioneers of '47 (Hunter-Foutz Company, October 1, 1847), only two months and a week after the first arrivals. William (Bill) settled in Farmington, 1848 and donated the land for the Farmington Cemetery. He  helped defend Echo Canyon during the Utah War (1857), and helped relieve Johnston's Army of some of its government cattle up in Wyoming.

I've known for some time that my 3rd-Great Grandfather Rice died in Centerville in 1913. While wondering where he may have lived, I was clueless as to where or how to figure it out. That changed after he stared me down out of that picture. 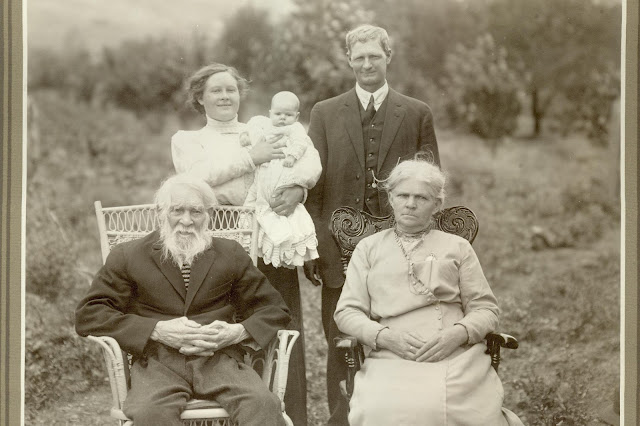 He's looking right at me. I had to find out where this picture was taken.

By the apparent age of Grandpa, I figured he didn't travel far from home. Someone probably carried those chairs out of the house and got him set down. The older woman sitting I assumed was his second wife, Ann Victoria Rose, my Grandma Rice having passed away in 1899. But she is identified as Ellen Mariah Rice (1846-1924) (who was an infant pioneer of '47). The only other person identified is Joseph Hyrum Glover (1869-1936), whose mother was Ellen. So Joseph was a grandson of William Kelsey Rice. I had assumed the other woman was his wife, Edith Van Orden (1870-1944) (but she looks so young!), proudly holding an unidentified infant. The clothing and leaves in the orchard indicate summer in Centerville. And my wife says that baby is only a few months old. With the photo there was a history linked on Family Tree that was new to me. It matched up with what I knew and told me that he lived the last few years of his live with his daughter Olive, Mrs. Archibald Duncan - not the line I come through.

Ancestry.com got me to the census. If I'd look at it before, I didn't connect to Arch Duncan. He's there in 1910 along with his father-in-law, Grandpa Rice, but the address is only "farm" in Centerville. There was no address on Grandpa's death certificate which I already had. I went on through the censuses 1920, 1930, 1940 - the last that is public, and all the same, "farm" in Centerville with a lot of Duncans living close by.

I hopped in the car forgetting my netbook computer with the picture, came back, got it, and went out to find that house just a few blocks from mine.

Just past Parrish Lane on 4th East, midst all the newer homes on subdivided lots, there are several older homes of the stone washed down the canyons hemming in our narrow green of Davis County between them and the Great Salt Lake. I figured this would have been some sort of Duncan Family farm enclave. The older homes that I could see were a bit run down. There was no 519. What I needed was a well-established family in the neighborhood that could maybe know enough to identify the right farmhouse.

There was one solid, brick home that looked well-kept with a family name in metal hanging near the door. That was well-enough-established for me. I went up and knocked. A young man answered and holding my netbook open, I tried to explain myself not as a salesman, etc., and looking for someone knowing about the Duncan farm in the area. He said there were Duncan families all around and seeing his youth I asked if maybe there was someone older in the house (I though he was just a kid - 18 or so, but he's probably more like 28-30). He surprisingly said, "Well, my Grandpa's here, come on in." Very promising.

I followed him to the back bedroom and was astonished to see a very elderly man, bald head (not like Grandpa Rice!) and very thin and frail looking. The grandson introduced me as someone doing family genealogy looking for the Duncans. The elderly man seemed quite pleased to see me and I knew I was in. He said he had known Arch Duncan very well and explained where the house was just behind and below the house across the street. All things became past and present with the elderly gentleman explaining how the nephew had taken the house and was a contractor having built Bountiful and Viewmont High Schools and the Las Vegas Temple. "He must have put half a million dollars into that old house," the old guy said.

He told me to go up the street a little, turn left and take the first left that goes in to the house just across the creek, Parrish Creek. I found it, went up to the door and knocked. No one home. I'm going back another day when hopefully someone is home and will let me visit. So I took my pictures:
And I think I know the day the picture of Grandpa Rice may have been taken - June 10, 1913 - less than a month before Grandpa passed away on July 6. From the Davis Co. Clipper, 1913-06-13:


There were five generations met at the home of Mrs. Archie Duncan Tuesday, June 10. Mr. W. Rice who makes his home there with his daughter, Mrs. A. Duncan. Those who came were as follows: Mr. Rice's three daughters, Mrs. Ellen Glover, Mrs. Lucy A. Clark, Mrs. Elizabeth Picher; Mr. and Mrs. Joseph Glover, grandchildren; Mr. and Mrs. Martindale, great grandchildren; and Miss Rena [M]artindale, great, great grandchild. After dinner the five generations had their picture taken.

Wait. The picture could be that five generation picture taken at the time of the bigger family gathering! There are - FIVE people. The right people were there. I could not find a Rena Martindale born in 1913, but I did find a Reva, either Family Tree or the Davis Co. Clipper slipped a letter (more likely the Clipper). She was born 15 March 1913, just the right age for that baby in the picture held by a woman who appears significantly younger than Joseph Glover. The woman I thought was Joseph's wife could be his 21-year-old daughter, Edith Laurena Glover (1892-1972) the proud mother of baby Reva ["Rena"] Martindale.

Yesterday morning I woke up with Cwm Rhondda, or the Mormon "Guide Us Oh Thou Great Jehovah" playing in my head (Rice is a good, Welsh name). I needed to get to the Temple to do something related to a descendant of William Kelsey Rice. I went to the computer and printed off the ordinance sheet, took it to the Bountiful Temple, and got the blue card that I'm sending to the appropriate, closest family member. It was later that the picture popped out and I found the home where Grandpa Rice last lived.

This can't be a coincidence.