The Miracle of the MOTB Dress

Remaining a believer in the Spirit guiding me not knowing beforehand where I was going, I have to share how I was inspired to buy a dress yesterday. Then I learned that it had to be confirmed by the mouths of two or more witnesses.

My wife is a simple dresser. She's not one for fancy fashions or trendy display. She is a beautiful woman even though she sometimes doesn't believe that. She hates buying things for herself unless she can find them at a super sale at Kohl's taking advantage of all the coupons, stickers and Kohl's cash she can. That's how she justifies her personal purchases.

Closing in now on our daughter's wedding with no time left to put it off, there has been serious discouragement in the house because she now has to find a suitable Mother-of-the-Bride (MOTB) dress. We've checked on-line. Our two daughters have given her considerable advice and suggestions. I've even been to Macy's and Nordstrom's at City Creek with her and thought we had things that would do but she is a challenging shopper. She's been to a lot of other stores around the Valley. She's even been to Kohl's. She has a skirt or a top that she thinks will work. But this is our youngest daughter and she, and all of us, are entitled to present ourselves well (within our moderately respectable means) for this wonderful occasion. (We even like the guy she's going to marry!)

Yesterday for my lunch break, I walked over past the Gateway to the UTA place that sells bus passes. It was the last day of the month. As I passed the Gateway there is a Bridal & Prom shop with "Latter-day Brides" line of wedding dressing prominently advertised. I wondered if they might have MOTB dresses that would work (there is the whole appropriate Latter-day MOTB attire-thing to consider as well). I walked on by then stopped. Yeah, I should just go in and check. I went to the door just as a young bride-looking woman and her mother went in. My girls watch those Bridezilla shows on TV and I wanted no part of that scene. (And we do have a bit of a Bridezillita at our house). So I turned back and went on down the street past the store.

I stopped again. Thinking that I was a long way from the office, and from home, I might not get a chance to ever check so I might as well as long as I was there. Going back and then in, there was no one at the counter. I went around past a lot of foofie prom dresses looking to see if they might have a MOTB section, and a clerk came up to me and asked if she could help. I asked if they had MOTB dresses. She said, "Of course. What is the date of the wedding?"

Grimacing, I responded that it was next Friday. She said, "Well then, you'll have to look at our sale rack." I assumed that they must match up colors and styles and then order dresses to be custom-fitted. But as weddings go, sometimes the colors change, the dress isn't quite right, or the wedding is called off completely - a heck of a lot easier to do than once past that.

I asked for the size we were looking for and she waved to a section of the rack. I had already seen the one jumping out at me. It was perfect! The right size, an elegant and modest style, and the right color. Technically, the tag said the color was "Bordeaux." I was already on notice that "Burgundy" was out but I remembered the plums in my grandma's back yard and this was a match! I asked the sales clerk and she said it would be essentially the same as "plum." I hung it up to take pictures with my cell phone and started texting my wife and two daughters with the miraculous find. 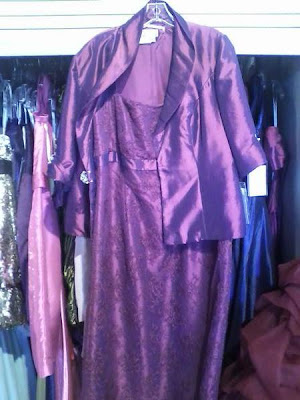 My wife was not responding but the daughters thought it was great! The Bride said that it was Mom that would have to be convinced as she is a difficult shopper. So I asked our Bride if she could come down with her later to help in the convincing.

Never getting my wife to answer the phone, I took the bus home. Finally, she called me saying she didn't have the phone with her all day. We arranged for me to hop off the bus at 1800 South, Bountiful and there she was in St. Olaf's parking lot. Picking up our daughter, we headed back into the City to "get" the dress.

We got to the store, she tried it on. It was beautiful, good fit, she liked it . . . our daughter informed that it wasn't "plum." And she got her Mom convinced. "Yes," she said," There is too much red in it. I said, "That's OK, it's still plum!" I explained how my Grandma had plums in her back yard and sometimes when they got really ripe, they turned a little reddish. Continuing, I said it was exactly the same color as the "Ebb Tide" rose I had bought at J&L that advertised itself as a "deep plum" color.


In fact, through the wonders of "Google" you can see that the dress looks more purple than either the plums or the flowers. (I didn't do any photo-shop tinting, but maybe my cell camera isn't the greatest). I even asked the sales clerk, and they must be trained to stay out of family disputes as she declined to get involved. Even Liz Claiborne equates "Bordeaux" with "Plum." I asked how long it would take to order a dress. "Eleven weeks." So it was that kind of place.

There I was in the middle of a bridal shop turning into Dadzilla-of-the-Bride.

With no other good options in the Gateway as most good stores have moved to City Creek, we got some Panda Express (after Dadzilla reluctantly admitted there was a food court and I knew where it was with BLM offices in the vicinity.) Then my wife said, "Well, we haven't checked out Fashion Place and they have a Dillards." So off we went.

My wife was being very kind to me knowing she'd broken my chivalrous spirit and Dadzilla mellowed out. I laughed at the oddly annoying drivers on the freeway and didn't even get perturbed when that guy stole our parking spot right in front of Nordstrom's. (I am nostalgically attached to that store having grown up in the Seattle area).

We got up to the women's floor in Nordstrom's and my women folk headed for the rest room. I told them I'd be back in 30 seconds with the perfect "plum" dress. I walked over to fancy gowns and pulled a beautiful, long, dress off the rack. The tag even said it was "plum." It was the wrong size and the only one, but I knew with the magic of a computer and a string of stores around the country, we might just pull this off. I casually asked the clerk at the computer if she was familiar with the color 'Bordeaux.' She said that it was in the same family as plum and would be a complimentary option. (Vindicated.)

My wife and daughter loved it. And yes, they could get it in the right size. There was one in San Francisco and one in Texas. If only it had been Southern Cal, my boy or his wife could have picked it up. They ended up preparing an on-line order that would be at our house next Wednesday, two days before the wedding. That made us all a little nervous, but they had a women come and measure my wife so they could order the exact fit. Still . . . . We left the order on the counter for us to come back.

Then it was off to Macy's. Not much there.

Finally, Dillards. We found some plum stuff. We were all tired by then. I pulled off the racks anything that was remotely plum. And my wife tried on a lot of things assisted by the Bride. We were all getting tired. But a suitable combination was finally arrived at. my wife even found a great sales clerk to ring her up with some good manipulation of discounts by opening a Dillard's card (another of my wife's shopping tricks - she then pays it off and never uses it again or cancels - although I still have a Kohl's card in my name for some reason. I think it's so I get more discount stickers in the mail.) It's a confused and slightly debated fact with us all being tired, but they conceded that I had found the right top first to go with the plum skirt.

On the way home, my kind wife validated my idealism by explaining that if I hadn't been inspired by the first dress, we never would have taken the epic quest to find the right one that we were all happy with. Yes, I suppose that windmill is vanquished and the grail is achieved. And our spiritual inspirations are confirmed by three witnesses.

And the dress? You'll just have to wait for the wedding pictures. But I will show that it "plumly" matches the Amethyst heart pendant with the Celtic love knot I got her for Valentines Day. Somebody thought ahead. 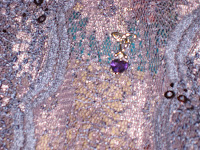 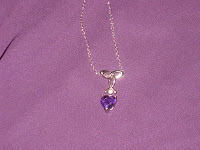 And the knight's lady will be properly presented to the royal wedding court. And all I get is a plum tie.

Yeah, I could have been Prince Philip looking regal and chivalrous in plum: 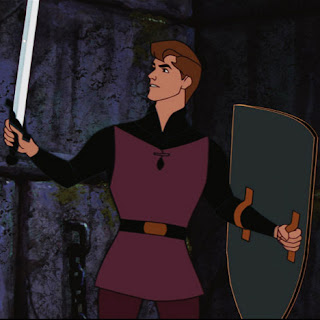