It happened again! This time a comment on one of my blog pieces about guns. (So far, I'm getting a lot of interesting material from gun advocates but not a lot that makes much sense). There was another one of those made up quotes attributed to one of the Founders. This time, Thomas Jefferson:


"The two enemies of the people are criminals and government, so let us tie the second down with the chains of the Constitution so the second will not become the legalized version of the first."

But Thomas Jefferson didn't say that! He said a lot of things - some of them a little over the top, but he didn't say this one. While it's hard to prove a negative, I have done a lot of reading on Jefferson including his own writings. I mean, I slogged through his Notes on Virginia and I don't even like the state that much! (See here for a negative and here for a positive view of the Commonwealth). I'm not trying to brag, but this is the Jefferson shelf in my library: 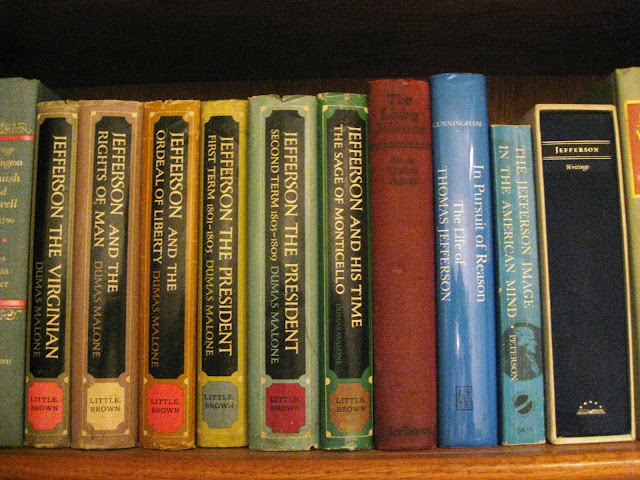 And I did provide the guy with the comment a reliable internet source debunking the quote at the The Jefferson Encyclopedia maintained by the Thomas Jefferson Foundation at Monticello. The Encyclopedia does acknowledge that the words "chains of the Constitution" are found in Jefferson's draft of the Kentucky Resolutions (1798):


"let no more be heard of confidence in man, but bind him down from mischief by the chains of the constitution" Text found at the Papers of Thomas Jefferson, Princeton University.

Admittedly the thought is somewhat similar. But the history of the Kentucky Resolutions has been very controversial over the history of our Constitutional Union. And Jefferson's draft language didn't even make it into the final Resolutions that didn't go very far anyway as Jefferson was elected President in 1800 and the Alien and Sedition Acts were dispensed with. Of course the Kentucky and Virginia Resolutions caused trouble down the road as a theoretical basis for "nullification" and "compacts" of states and justification even for "secession" - all pernicious doctrines tending to undermine the government of, by, and for We the People. A State is still a State whether big or small and to the extent it places some people over other people - as in slavery or segregation or corporate power - it is a wicked and evil abuse of power - let the people rule through elected representatives - a "republican" form of government with broad suffrage to respect democratic principles - yeah! a democratic republic!

[As an aside, the Resolutions are probably the best example of "States Rights Doctrine" being used for a "good cause" as it was a challenge to the onerous Alien and Sedition Acts (sort of like our "Patriot Act" which is a discussion for another time). But two wrongs don't make a right.]

Bottom line, I am so pleased to defend one of our Founders against falsehood spread on the internet yet again!  I love those guys in spite of all their faults and contradictions. There were some good Founding Mothers too - Abigail Adams and Sally Hemmings come to mind - yeah, let's give credit where credit is due. And let's stop making up stuff on the internet or spreading falsehood without checking sources first!
at 6:53 PM