And the Next Prize for Cliff-Walking Goes to. . . 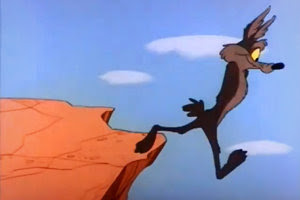 I'm afraid it's the Republicans again, specifically Speaker Boehner who can't win because the majority of his majority will not allow it any other way. The President is still holding all the cards. Boehner is thrashing about trying to blame someone else - the Senate, the President, Seth Macfarlane - but the Constitution along with tradition says its the responsibility of the House to initiate bills to raise revenues and appropriate funds (Cons. Art. I, sec. 7 requires revenues in the House, appropriations traditionally - and theoretically - go with revenues and originate in the lower house. See this Republican source.)

The Sequester comes Friday. (Did I mention that "sequestrar" in Portuguese means "kidnapping"?) But it will be a slowly painful fiscal crisis unlike a government default or shutdown. Personally, and remember all my caveats that I do not speak in my official capacity on this blog, our DC office has informed us that we will be receiving furlough notices soon (probably Friday as law already requires 30-day notice and Congress hasn't gotten rid of that yet). And by imposing a hiring freeze, cutting travel and training, we can probably get by with just three days of furlough assuming this even goes to next October 1 when a new fiscal year supposedly begins. "I only regret that I have but three days to lose for my dysfunctional country!" (sorry, Nathan Hale).

But I don't think it will get that far. The next cliff-walking will come in only a month at the end of March when the current continuing resolution funding the government ends. The President has said he will veto any bill that does not resolve the sequester still looking for his grand bargain of enhanced revenues (roll-back on tax loopholes and deductions, although I'm sure he'd take more hikes on the most able to afford it) along with some adjustments to entitlement programs (yes, that 's his offer!). The Republicans got snookered into the round-about tax hikes on the rich in the last fiscal cliff and they "whon't whet dat 'appen again!" (says Elmer Fudd).

The funny thing is that just a few weeks ago the Republicans were all for rolling back tax deductions and loopholes and now the President is calling them on it. Their response is, "but you already tricked us into a tax hike on the wealthy!" Yeah, that won't play even in Peoria - Arizona or Illinois.

So, what to do? I read something somewhere about how nobody in Washington really knows what's going on - another reason why its hard to believe in government conspiracy theories (except there is that Dick Cheney thing). The Republicans even believe they can't risk another complete shut-down at the end of March. I'm not a great one to know what's really going on or predict the future. But hold tight as some are not so good at cliff-walking.

We did dodge an interesting play by some Republicans in the Senate including the illustrious and cranky Senator John (war-hero-but-sore-loser) McCain. They wanted to pass a law that would allow the President to shift the automatic cuts to less important programs to stop him from his "scare" tactics about health and safety (airport flight controllers, meat inspectors, Interior attorneys [oops]). The Republicans in both the Senate and the House realized that they would be giving away one of their most important prerogatives (even if they're not exactly using it right now) which is the power over the purse. All the debt, all the money spent goes right back to the laws of Congress. The President can't spend a dime they don't authorize and appropriate.

There was another article I read somewhere (sorry I didn't keep tabs on these) about a polling experiment that asked Republicans whether they favored a certain position on immigration. Sixty-plus percent said yes. When another group of random Republicans were asked the exact same question only adding that it was President Obama's proposal, the yeses went down to 30%. So, at least a third of Republicans have an irrational dislike of the President - not based on policy. I think those are the same guys Boehner now has to work with in the majority of his majority.