Men's Hearts Shall Fail Them 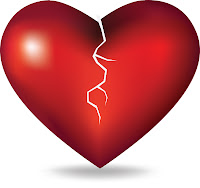 For a long time in my life, I interpreted this portion of the prophecies of the end times to mean an increase in heart attacks. As we have conquered so many diseases, there has been a rise in coronary disease - which is also preventable to some extent if we stop eating french fries. OK. Sometimes I can be a literalist too, but I'm not getting to my point here.

We have posted on some rather difficult issues recently. I want to share with you what I now think the Lord meant by "Men's hearts shall fail them." We first see it in Luke 21:26, clearly related to the Lord's Second Coming to the earth. And in Luke, there's a clear connection to fear. Some say that fear leads to anger, hate, suffering, and even the dark side (according to Yoda. And he was technically a Muppet when he said that, so I think he's trustworthy).

Yet we are blessed to have modern scripture with a bit more clarity:


And in that day shall be heard of wars and rumors of wars, and the whole earth shall be in commotion, and men’s hearts shall fail them, and they shall say that Christ delayeth his coming until the end of the earth.

I personally believe - and not speaking for the church - that "men's hearts failing" refers to the loss of Charity in the world - and in each person's heart. To slightly paraphrase Scripture, "It is by [Charity] we are saved, after all we can do." Replacing "Grace" with "Charity" in 2 Nephi 25:23 does not seem at all out of line when you follow the witness of one of my favorite chapters of Scripture, 1 Nephi 11. And on to the Apostle Paul:


And now abideth faith, hope, charity, these three; but the greatest of these is charity.

It doesn't matter what list of commandments we keep or what list we keep of others supposedly breaking them. If our hearts are failing in Charity, then all really is lost. So just Love God and your neighbor and everything should fall into place. If you love God, you will keep His commandments. Just drop the lists.

I am not saying that we should stop living the commandments or condone those who do, but without charity, we are nothing. 1 Cor. 13:1-3. Love all the commandment-breakers including yourself. And trust in the Lord as you repent.

And it is important to have Charity for all - including Gays - certainly those who struggle with same-sex attraction and remain faithful to the Gospel and church standards - but also Gays who hate certain religious beliefs because other Gays won't join their practices. We must have charity for the supposed "religious" who hate Gays and all other supposed evil-doers. You can even have charity for the occasional Stake President or General Authority who may go off the deep end. Some of these are not easy to do and there are different challenges for us all. But entrance to heaven is not based on a check-list of do's and don't's of sins and certainly not political platforms, or economic philosophy, or which is our favorite or least favorite Apostle or church leader.

Love is not all you need, so maybe President Monson was right to look askance at the Beatles. But without it, all the rest is meaningless.

For a powerful if somewhat disturbing thought I return to Dostoevsky in The Brothers Karamazov:


“What is hell? I maintain that it is the suffering of being unable to love.”

Sometimes true love results in a broken heart - exactly what the Lord requires. And to close, from the ultimate source of Truth and Love:


This is my commandment, That ye love one another, as I have loved you. John 15:12