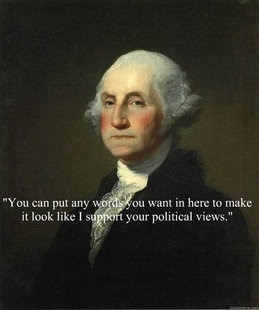 Yes, the internet is a blessing and a curse. A wealth of information can be easily gained and also very easily abused. Proof-texting is bad enough, but sometimes there is outright fraud.

When I first checked Facebook this morning, I was disturbed by one of those little, captioned posters with George Washington supposedly saying:


A free people ought not only to be armed and disciplined, but they should have sufficient arms and ammunition to maintain a status of independence from any who might attempt to abuse them, which would include their own government.

"That can't be right!" I thought. And with just a few clicks on the computer I found someone debunking the quote. Still not good enough for me, I went to the source he cited. Fortunately, I have the Library of America edition of  George Washington: Writings (1987). I skimmed to the date at page 749, and sure enough, from Washington's First Annual Address to Congress, January 8, 1790 (proto-SOTU), I found the actual quote:


"A free people ought not only be armed but disciplined; to which end, a uniform and well digested plan is requisite: And their safety and interest require that they should promote such manufactories, as tend to render them independent on others, for essential, particularly for military supplies."

I even made a few more clicks to see if I could find a web link with the correct text. Not only that, I came up with his actual handwriting, at least according to Wikipedia and they at least cite to the Library of Congress:

That sounds more like George. What with putting down the Whiskey Rebellion and all, that first quote just didn't ring true. I don't blame my Facebook friend who would never deliberately make stuff up like that, but someone did.

So, feel free to express any views you wish. But when you pass something along putting words in the mouth of our Founders, try a little checking of sources first. We wouldn't want to accidentally start a Whiskey Rebellion.

Addendum:
January 16, 2013
As this has surprisingly become my most-viewed page of all time - apparently because Google and other search engines have placed it near the top of their results for the erroneous G. Washington quote, I thought I would add links here to some of my our other postings on guns:

Email ThisBlogThis!Share to TwitterShare to FacebookShare to Pinterest
Labels: founders