My Tribute to Ray Bradbury

There's more I have to say about my buddy Ray. He was pretty much a friend to the whole world. And I felt like he was my buddy because he spoke to me through his books - and even helped me in times of trouble.

My teenage angst was rather severe. I suppose everybody who goes through it feels that way or they wouldn't call it "angst." I've already blogged about how the Who helped me, but there was also Ray. In the Spring of my sophomore year of high school, I switched from Juanita High to Inglemoor. That's maybe a story for another day as to how that came about, but the result was that I found myself in a new school with no friends and barely any acquaintances. But Inglemoor had a great little store that sold paperback books and candy. Most lunch hours found me huddled in a cubicle with a bag of peanut M&M's and a Ray Bradbury book. They cost 95¢ in those days, well within my paper-route budget. In my loneliness, how could I help but feel a connection to someone who could express this:

“Some people turn sad awfully young. No special reason, it seems, but
they seem almost to be born that way. They bruise easier, tire faster,
cry quicker, remember longer and, as I say, get sadder younger than
anyone else in the world. I know, for I’m one of them.”

On the more positive side, I was stunned like Montag when Clarisse asked him the question, "Are you happy?" The message I learned was that books could make you sad but also happier than you ever imagined as imaginations run free on the printed page. And they smelled good too. As Ray explained, new books have a special smell and old books an even better one - they smell like Ancient Egypt. Computers will never smell that good.

And my favorite book, and Ray's too as he acknowledged to me in a personal letter, Something Wicked this Way Comes, lays out that the only way to overcome absolute horror, particularly the horror of time making you grown-up and old as you ultimately face death -- is to laugh.

I bet Ray was laughing yesterday.

When Ray asked for my cousin's address, I thought that gave me another opening and he certainly seemed like a nice guy. So I went out and bought a new copy of Something Wicked. I checked the weight and along with my cousin's address, included an envelope with return postage as I sent it off to him requesting a signature. It came back like this: 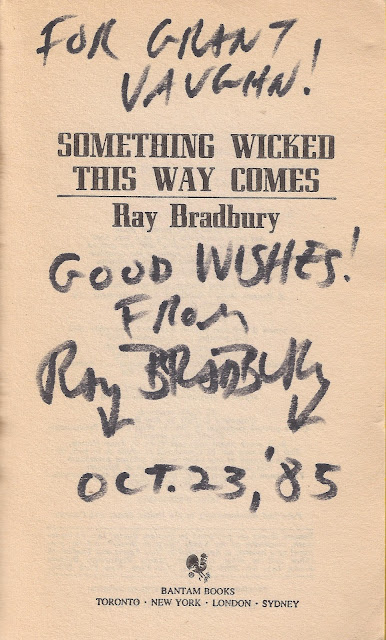 I explained to my Facebook friends what the arrows mean as a message from Ray. But I'll leave it open on the world-wide web for your discovery. I provide just this one hint -- I think Ray was trying to sell me a lightning rod.
at 5:03 PM