"LIVE FOREVER!" he told a young Ray Bradbury. I honestly thought it just might work. But the L.A. Times reports today that Ray has left his mortal body. Yet even that doesn't mean he isn't still living.

Yes, there are all those trite ideas about as long as we remember someone, they live on in our memories. And Ray pushes past that triteness leaving behind not just his worn-out physical body, but a vast record of his amazingly creative thoughts and ideas in his books and stories.

But if you'll excuse me the indulgence of my personal belief system, I believe Ray will live forever. He's in the Spirit World now and while I can't judge, I know he was a man of a good heart indicating that he is in a good place there. His physical body will one day resurrect and stand before God like all of us. And Ray still has many opportunities for learning and choosing and even creative endeavors beyond his wildest imaginations - and his have been pretty wild to this point. He even has some Mormon friends who preceded him in death who are likely there to greet him. How do I know? I feel like I'm a friend too: 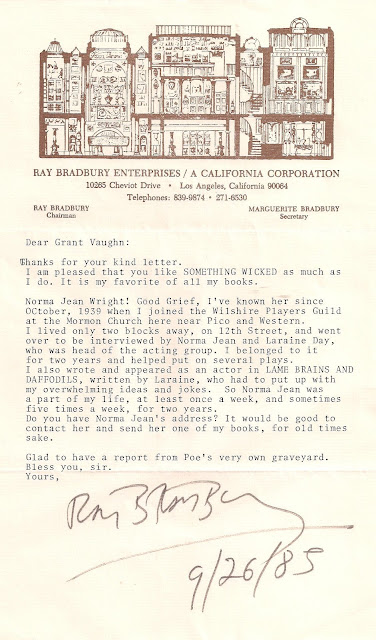 This letter hangs in my library - a library I started when I read Farenheit 451 because if they were ever coming for my books, I wanted something to fight for.

And Ray's friends? Norma Jean was my maternal Grandma's cousin. And while that sounds a little distant in relation to me, my Mom knew her well preparing the index for a family history book. So I was able to send Ray her address by return mail.

Laraine Day was an actress under contract to MGM. I'm hoping some day my Mormon History Blog friend at keepapitchinin.org will write something up on her.

And those weren't his only Mormon friends:


"According to BYU professor Linda Hunter Adams, Ray Bradbury once told her in a phone interview that he was good friends with Reid Nibley (Hugh Nibley’s brother) when he was a boy, that he sometimes attended MIA activities with Reid, and that they even wrote Mormon roadshows together—Ray writing the scripts and Reid composing the music." --From an article by Katherine Morris & Kathleen Dalton-Woodbury at Mormonartist.net.

I figure the LDS Church he must have frequented was the one at 1209 South Manhatten Place, the closest to Pico and Western that I could find. (And it's close to 12th Street). By its appearances on Google Maps' street view, it would be of sufficient historical vintage back to the 1930s.

And Poe's graveyard? While Edgar Allan Poe was not a Mormon, I attended law school at the University of Maryland in downtown Baltimore. The law school oddly includes an old church and graveyard containing not one, but two graves of Poe. I couldn't resist telling Ray.

So, wherever Ray is laid to rest, I hope he rests well and enjoys his time in the spirit world.