The World Has No Need for our Drones 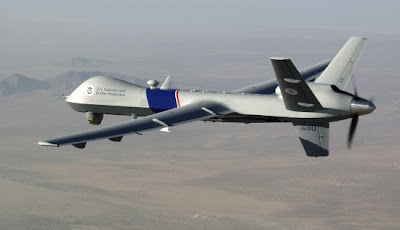 Conor Friedersdorf, The Atlantic's resident Libertarian, has a series of articles here, here, and here on the President's drone attacks in his War on Terror (even if this President doesn't call it that). This is an area where I sort of agree with the Libertarians. The drone attacks appear to be an unconstitutional extension of the President's war power and violate principles of due process with regard to the essential human right of life regardless of citizenship. I hesitate to join with the Libertarians for a lot of other reasons and while my criticism of President Obama is justified, I see no alternative in Governor Romney as he would likely be worse in his continued attempts to out neo-con the neo-cons.

At least this President got us out of Iraq, is getting us out of Afghanistan, and got us barely in and quickly out of Libya. Romney opposed those decisions and drones on himself about being tough, including possible war, with Iran, Syria and maybe Russia (our "greatest enemy"??). And in spite of criticizing every foreign policy position of the President, Romney doesn't seem to offer much of a well thought out or comprehensive foreign policy of his own.

I reject the Bush doctrine of unilateral first strikes. I agree with the sentiment of the otherwise pugnacious Bobby Kennedy, who said in the midst of the Cuban Missile Crisis when the Joint Chiefs were preparing a surprise attack on Russian missile bases, "Now I know what Tojo must have felt like while planning Pearl Harbor." Bobby helped diffuse the Hawks and helped achieve a diplomatic solution averting WWIII. President Obama should know better as well.

One reason why I can't support the Libertarian world view which I understand as generally isolationist using war only as a last resort against actual attack, is that I do support the ideals and the occasional successes of the UN and regional collective security like NATO (as in Libya or Bosnia). Neo-cons and Libertarians seem to join political forces in opposing true international coalitions.

I can break my principles just far enough to accept the President taking out Bin Laden - better that one man perish than a nation . . . sort of like that. But the ongoing drones go too far. Congress could stop this by cutting off funding or by raising public attention through their power to investigate. That is, if they had half a brain or a backbone among them.

You're better than than Mr. President. Don't let the next guy or gal inherit that kind of unlimited power. Stop it now.
at 5:28 PM