Ragnar restored my confidence. I ran a couple of times this week and I feel physically restored as well. This morning I awoke at four, lonely, with my wife out of town. (It's been two weeks!) I thought that as long as I was going to be alone*, I'd rather do it on my terms in a beautiful place. So, as soon as there was enough light, I headed for Centerville Canyon.

To enjoy trail running, I take a minimalist approach. I started pre-hydrating so I wouldn't have to carry any water. It helps to have my hands free on some of the steeper, slippery parts in case I have to grab something or fall, hopefully using the hands to prevent a face slam. And as trail-running is so much better than the asphalt, I drove up to Cheese Park and parked so I could start right on the dirt.


Having freed myself from a running log and pace goals some years back, I didn't have a real plan as to how far to go. It was cool and I thought I had hydrated sufficiently at least until the sun came. It's about a mile from Cheese Park to the mouth of Centerville Canyon. I decided to run up the two switchbacks on the road to the "V" and head up the trail as far as I felt comfortable. There were some SUVs at the trailhead so I figured some Scouts must be up there.

The coolness was perfect as I tend to run hot - but not fast on a trail run, particularly this one that includes some scrambles over rocks and balancing over the log and wire mesh bridges. It is a great trail for adventure as it is only minimally maintained. And certainly not that well used.

Softly treading through the Scouts camped at the first good campsite, I went on. I take it slow enough on trails so I don't trip. So, the run was gentle and not too challenging. Feeling so good that far I thought I might as well go up to the waterfall.

No one else was on the trail all morning (except for the still sleeping Scouts). And I was glad I didn't meet any bears-- or cougars. I wouldn't have minded the moose so much. After enjoying the greenery in the cool canyon and the good feel of my trained legs going strong up the little inclines, I finally saw the granite cliff indicating the waterfall.

While the water isn't anything like the flow of last year when we rescued the miraculous iPod, the waterfall is still impressive. It's not that big, but it was mine alone - and much better than an empty bedroom.

On the way back down, much faster, of course, than going up, the Scouts were stirring. One leader had even started down the trail with his backpack and let me pass. So I guess there was someone else after all, but as he was below the Scouts he didn't count. 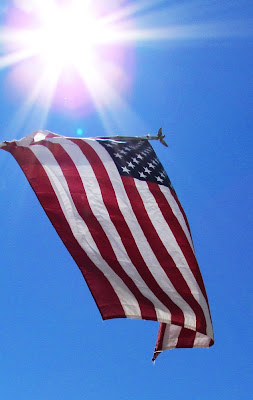 Then the sun started down the canyon. I was at the tight spot where the rock cliffs come close squeezing Deuel Creek down a cascade. Mahogany Grove (no real mahoganies) is up above on the north side. And up above that on a point of the cliff, is an American flag. You can see it from down in the Centerville inhabited areas, including out our front window.

One disadvantage of being a minimalist is that I almost never run with a camera. With deep regret I missed an inspiring, award winning shot of that flag and the crag as the sun hit it before any of the other rocks at the canyon mouth. We will have to settle for this photo I found by googling. Yet it matches so perfectly the thoughts that came into my head from the words of a Sparks song sent to me by a good buddy during the Bush years of the Iraq War:

Can I invade your country?
Oh Baby, Baby!

How 'bout let's not - unless it's in the form of collective security with a true coalition of countries authorized by the Security Council of the United Nations - or at least NATO. It doesn't have to be a declared war for collective security, but there should at least be consultation with Congress. And the more Congressional authorization, the better.

Even in my running I can't escape passionate moderation.