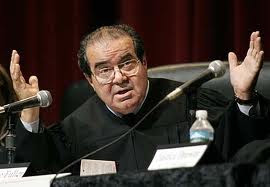 I met Justice Scalia once. It was at the dedication of the new federal court house in Albuquerque a few years ago. He was milling with the crowd as we had refreshments. Having never met a Supreme Court Justice, I went up and shook his hand. It was kinda creepy. I'll just leave it at that.

Scalia's impassioned dissent in the Arizona Immigration case indicates that the politically conservative jurist may be a little frustrated. Also, the separate dissents/partial concurrences of the other two conservative Justices, Thomas and Alito, indicate the conservative wing of the court is not well united. Having been quietly abandoned by their conservative Chief Justice Roberts joining the majority in this politically-charged issue, this all indicates to me that they may have lost to Obamacare. I still think it could be 6-3. I'll eat my words tomorrow as necessary.*

The press coverage and right-wing face-saving on the Arizona decision is all wrong. The Court struck down all but one portion of the law, supposedly "upholding" the most controversial provision of checking papers on a police stop. But that is only for a legitimate stop for other reasons and the Court punted saying it was not yet in effect and they would want to see it tested in application and AZ State Courts before any determination that it violated the U.S. Constitution or was otherwise in conflict with federal law. At best, it was a message to Arizona to "watch out." The rest of the decision struck down all other provisions of the AZ law with reference to my favorite part of the Constitution, the Supremacy Clause.


You can read the whole decision here. To get the sense of it, you can see how seriously and even with a sense of Constitutional patriotism (in spite of a possible, unsourced reference to Spiderman), the majority considered these issues:


Immigration policy shapes the destiny of the Nation. On May 24, 2012, at one of this Nation’s most distinguished museums of history, a dozen immigrants stood before the tattered flag that inspired Francis Scott Key to write the National Anthem. There they took the oath to become American citizens. The Smithsonian, News Release, Smithsonian Citizenship Ceremony Welcomes a Dozen New Americans (May 24, 2012), online at http://newsdesk.si.edu/releases. These naturalization ceremonies bring together men and women of different origins who now share a common destiny. They swear a common oath to renounce fidelity to foreign princes, to defend the Constitution, and to bear arms on behalf of the country when required by law. 8 CFR §337.1(a) (2012). The history of the United States is in part made of the stories, talents, and lasting contributions of those who crossed oceans and deserts to come here.

The National Government has significant power to regulate immigration. With power comes responsibility, and the sound exercise of national power over immigration depends on the Nation’s meeting its responsibility to base its laws on a political will informed by searching, thoughtful, rational civic discourse. Arizona may have understandable frustrations with the problems caused by illegal immigration while that process continues, but the State may not pursue policies that undermine federal law. 567 U. S. ____ (2012), slip op. at 24, 25.

In Justice Scalia's dissent, he rather oddly argues from the Constitutional Convention, the Articles of Confederation, the Alien and Sedition Acts, and even the Kentucky and Virginia Resolutions. He ended with these "inspiring" thoughts:


If securing its territory in this fashion is not within the power of Arizona, we should cease referring to it as a sovereign State. I dissent." Scalia dissent, at 22.

Well, duh. With his grasp of U.S. History apparently ending with the administration of John Adams, I guess he missed that whole Civil War thing.