Can You See the Real Me? 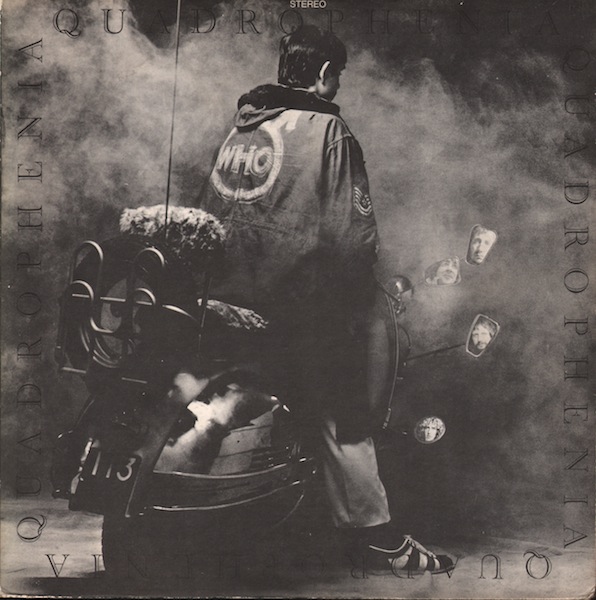 So it begins, the Who's over-the-top Wagnerian Rock Opera, Quadrophenia. Actually, "The Real Me" comes crashing in on Pete's guitar after a brief prologue of waves crashing on the cold, wet coast of Brighton, England. I was 16, exactly the right age for teenage disillusionment, loneliness, and search for something to cling to for salvation. Sometimes we all feel like we're drowning.


Let me flow into the ocean
Let me get back to the sea
Let me be stormy and let me be calm
Let the tide in, and set me free.
Set me free.

I bought this album several times. First on 8-track (true story) but it got stuck in the player and un-spooled which I tried to wind back up with the help of my dad (bless him for trying!) I re-bought it on vinyl, and then a second time on vinyl years later to replace the scratched one and copied it onto cassette tape. My current version is all digital off of my Who CDs box set with a few other tracks from iTunes. The music is incredible with its repeatedly interwoven themes and motifs. The story is moving. The performances superb.

Yeah, teenage angst is a passage if we can keep our head above water. Some do better than others. Some of us may never grow out of it, locking ourselves away in seclusion or worse. The story in the liner notes to Quadrophenia really fascinated me. I had so little in common with Jimmy's actual experiences as a working class kid from Greater London, troubles at home, school, work, drugs, failed romance (well, yeah, there was that), and especially taking the train for holidays or other escapes to the beach at Brighton and the battles between Mods and Rockers. But the feeling of it all seemed so right in an astounding way. And it was in that cold, rainy, wild ocean where I made the real connection.


A beach is a place where a man can feel
He's the only soul in the world that's real.

I know a wild ocean from the Olympic Peninsula. Much of that is designated wilderness in a National Park so wild you can't take a train or even a car, you have to hike in to rough headlands and sea stacks with wild surf crashing in the constant mist and nearly constant drizzle of rain. Well, that last part certainly connects back to England. I was disappointed when I first visited the Atlantic beaches on the DelMarVa Pennisula east of Baltimore with their pleasant stretches of sand and warm water. Give me a real un-"pacific" ocean any day. When you find a soft, sandy beach between the rugged headlands, that really means something!


Come sleep on the beach
Keep within my reach
I just want to die with you near
I'm feeling so high with you here.


Nothing is planned by the sea and the sand.

I had my teenage challenges like most. I am still amazed that I came out as well as I did without getting into more serious trouble. I had friends who did. I certainly had my share of mistakes and hurts too.


My karma tells me
You've been screwed again.
If you let them do it to ya
You've got yourself to blame.
It's you who feels the pain.
It's you who takes the shame.

And honestly, part of it was learning from Jimmy's bad choices. I did a rebel a little. It disturbed me that as a tail-end baby boomer, I saw all kind of teenage rebellion around me - pretty much all of it exactly the same. There were times I tried to fit into the fashions even if they were different than in Jimmy's day when he failed so miserably.


Where do you get those blue, blue jeans
Faded patched secret so tight?

Part of my rebellion, not even so much against my parents or their society but against the conforming non-conformists around me in the cuffed, bell-bottom jeans (yes, I had tried those too), was to cut my hair short and wear white shirts with classic Levis. Sundays I would put on a thin, dark tie with black, narrow slacks. This was way out of style, pre-New Wave by about five years. I did have a friend I had met on a Scout trip who inspired me, but he lived in another town. I was out there on my own.


Why should I care
If I have to cut my hair?
I got to move with the fashion
Or be outcast.

There is some pretty rough stuff in the story. Besides the drugs and some crude language, there is also the indefinite ending as it is clear throughout, certainly from the first song, that Jimmy has some emotional/mental issues. The story is left with us all guessing whether Jimmy fulfilled his intention to drown himself in the sea. My internal optimism would lead me to hope not, but I just can't tell. It was this disturbing end of the story most of all that helped me through some hard times in my teen life in challenging me to better emotional health, and yes, some better choices about drugs and other inappropriate behavior.

Some nights I still sleep on the beach
Remember when stars were in reach.

We can learn important things from sometimes tough messages. That happens in art. The beautiful music of Bizet's Carmen is, of course, the story of a woman of ill-repute who seduces a soldier then runs off with the toreador to end in angry death. Wagner's operas, along with their Townshendesque thematic musical motifs, are full of violence, incest, murder and mayhem including the destruction of the gods (which is pretty cool, by the way). And I guess you can say the same, ultimate message sort of comes out of Brunhilde's self-immolation as it does on Jimmy's Rock.

There are times even now in my life when I feel wet and cold, but I am glad I did get old. Sorry, Jimmy. But I am grateful in part because of you. And Pete. Quotes are from Pete Towshend's magnum opus, The Who's Quadrophenia.

I should have added to this some time ago, but it is appropriate on the 50th anniversary of Quadrophenia hitting the British Charts. The Who (remaining ... Pete Townshend and Roger Daltrey) commissioned a classical recording of this Rock Opera making it a more traditional Opera or at least musical theatre style with Alfie Boe of Les Mis fame.

They produced a musical video of Love Reign O'er Me with an unambiguous statement that Jimmy did survive and grew old as we all should. I cheered with wet eyes when I saw that: