The Civil War Isn't Over

Hat tip to Ardis at Keepapitchinin.org who linked on her Mormon History blog a fascinating clip from the National Archives of elderly Confederate Civil War Veterans giving the "Rebel Yell." It is entertaining, informative, and absolutely chilling.

Also, in the same Smithsonian article is reference to another clip of film that I haven't been able to find yet on-line--an elderly Union Veteran, William Smallwood, of the 54th Massachusetts Regiment performing the manual of arms with a wooden crutch. That I would like to see. The 54th Massachusetts was the all African-American Regiment honored in the film Glory. If I were King of the World, I would require every U.S. Citizen to see that movie. Of course, the whole point of that film is to inspire us beyond the divine right of kings and the ownership of humans in chattel slavery. But it is so much more than that.

As vile as slavery was in the body politic, it truly was a stain on the founding documents needing the inspiration of a later generation led by Lincoln, including the sacrifice of much blood along with his own to get us the 13th through 15th Amendments. But the Civil War was not just about slavery. That was the obvious and tangible cause once you get past the mechanistic and even false and exculpatory histories that say it was about Northern Industrialism or other economic reasons. Besides the fact that slavery was still "economic," mostly important depending on which side of the ownership question you happened to be born, it was only the obvious step moving closer to the Constitutional ideal of government of, by, and for the People--all the People. Yes, I won't stop talking about this.

You can watch Glory for free on Crackle.com. I swear when I first saw this movie in a theater it was rated PG-13. It's now one of those R movies I want my kids to watch like Saving Private Ryan, Schindler's List, or even Letters from Iwo Jima so they can have some sense of what war is like and why it just might be a necessary evil--hopefully not in their experience. Or here's a YouTube clip to get you started:

The opening scenes are some of the most chillingly powerful. Captain Robert Gould Shaw's inspiring if slightly juvenile and idealistic words in a letter home to his mother are contrasted with the shock of bloody, gory war at the Battle of Antietam.

That was our "favorite" battlefield when we lived back in Maryland. Gettysburg is inspirational for good reason, yet the field and ridges are cluttered with distracting stone monuments to mark the location of every unit at every point in battle down to company level, at least in such heroic regiments as the 20th Maine on Little Round Top. In contrast, Antietam is heartbreaking in its pastoral beauty. The National Park Service has done a wonderful work in preservation and restoration right down to the crops growing in the corn fields and orchards.

Back to the film Glory. It has its imperfections in some cliché-ed characterizations. Morgan Freeman plays his wise, old magician (maybe even god-figure he's so good at). Denzel Washington has the ex-slave, angry black man down to an academy-award-tee. And some find Matthew Broderick oddly cast as the Colonel from his Ferris Bueller days. But he was playing a young man trying to be greater than he was. It is just a movie. It may even be the swelling music inspiring, then hitting its discordant notes at the battle scenes that adds the inspirational power and shock. And glimpses of the idealism of the Beaufort Experiment with its flaws as well as the whole concept of African-American soldiers fighting for freedom is met at the end with the tragically heroic failure at Fort Wagner.Yet, it was not a failure because of what they stood for and what they sacrificed. In Colonel Shaw's words, "Strength of Heart." 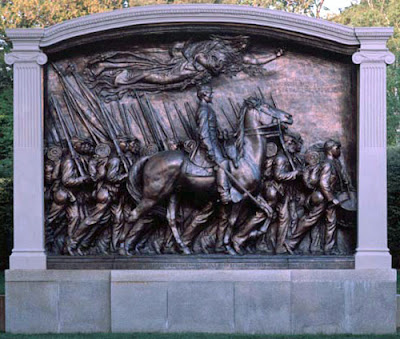 The issues of the Civil War still live because we still do. And we haven't yet achieved that more perfect union. Yes, I won't stop talking about this.
at 9:18 PM