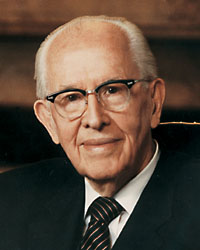 I was present when then President of the Quorum of the Twelve, Ezra Taft Benson, gave his "Fourteen Fundamentals" address in the Mariott Center at BYU. I didn't have any particular problem with the substance, it was a little of the tone and the context that made me, in a purely human way, feel a little odd. President Benson was the senior Apostle after then President Spencer W. Kimball and would likely be the next President of  Church. The speech is a strongly stated testimony of the authority of the Prophet in all areas, spiritual, temporal, and even "civic."

Well aware of President Benson's very conservative political views, and also aware that they were not the same as the rest of the church leadership, he being perhaps, the most conservative on any continuum, I lodged it away in my mind sure in my ultimate faith that all things work out under the Lord's ultimate leadership.

Recently, I commented on some blog [I can't remember where] that while Elder Benson was certainly known for his conservative political views, inspiring many (but not all) in the church in that direction, I seemed to recall that he did not promote conservative politics when he was actually President of the Church. I remembered his exhortations on reading the Book of Mormon and to beware of pride, but I couldn't think of anything from his conference talks, as President, promoting conservative politics.

So I went back and checked. The church has wonderful resources on-line including every singe general conference address back to 1974. I cut and pasted into a Word document all of President Benson's talks from April, 1986 to October, 1989, the last one of his authorship even if it was read by President Monson due to President Benson's declining health. I then was able to search on that document for terms like, "constitution," "government," "founders," "politics," "agency," "taxes," etc. And I was even able to produce a Wordle! [even if I can't quite figure out how to make it bigger. you have to click on it!]

I guess I don't need to make it bigger as there are certainly no surprises as "Book of Mormon" along with Lord, Church, God and Christ are prominent.

There was a conference address from October, 1987 on the Bicentennial of "Our Divine Constitution." It's a wonderful talk! I might have presented it a little differently, but then I'm not Ezra Taft Benson, and very, very far from being the President of the Church (for which I'm sure we're all very grateful). He certainly promoted the divine inspiration in the process of compromise that resulted in our Constitution. I certainly have no objection to that view. He encouraged study of the founders to understand what they intended and encouraged a reading of the Federalist Papers. And he did not declare what political or even interpretive conclusions are to be drawn from that study! It appears to be serious prophetic restraint. The only thing I would question at all is in quoting the modern LDS scriptures on the Constitution, he did not include the one that I understand to be the Lord's purpose in its establishment to prevent human bondage, even if that inspired promise was not fulfilled until the 13th Amendment after a tragic Civil War and the death of an inspired U.S. President.

In all his conference talks, I saw nothing about opposition to taxes or government in general. Nor did I see anything about satan's plan to destroy the agency of man linked to progressive politics.

In 1985, a few years after I had heard the "fourteen fundamentals" I went to a regional conference on the Maryland side of suburban Washington, DC. President Kimball was very ill and President Benson was the visiting authority. My wife had stayed home with our newly born second child and I had come with our young daughter, mainly to give my wife half a break. Realizing that President Benson was about to speak, I had the thought that he would likely be the prophet soon and I had concerns whether that could cause me a challenge of faith because I knew my political views were not like his (even though I had voted for Reagan twice, now perhaps, regrettably) and he could, as prophet, give instruction on "civic" matters. So I said a silent prayer asking for a witness as to whether he was a prophet of God. As he spoke, I had that sweet calm of assurance and witness of the Holy Ghost that he was a prophet (as we sustain all our Apostles even if not the President of the Church). I also felt a calm assurance that I need not worry about any political differences. I never have.
at 7:58 PM