Four Days to Go! My Picks for Tuesday

Oh, and the Dems stay in control of the Senate. I'm going very optimistic to call it as 52 Dems, 46 Repubs, and 2 Independents who will caucus with the Dems. Not quite enough for the 60% cloture rule (only Constitutional in that the Senate can set its own rules, but it's a stupid rule), but the Republicans put up some really bad candidates for the Senate and Dems are doing better than originally expected. Repubs keep the House mainly due the short coat tails of the President. They will hold the House by a smaller margin, unfortunately not as unbounced as Tiggers should be.

I admit I got my 2% popular vote figure from Nate Silver, Nerd King of Statisticians. Check out his website at FiveThirtyEight to see his interactive map of states and his analyses of the likelihood of each electoral college win. [I swear, Virginia changes from baby blue to pink and back again every time I look!]

From Sam Wang's PEC as of November 2, 2012 8:00 p.m. EST. I like this map because it shows the states with their respective sizes relative to their importance in the electoral college - roughly comparable to relative population. 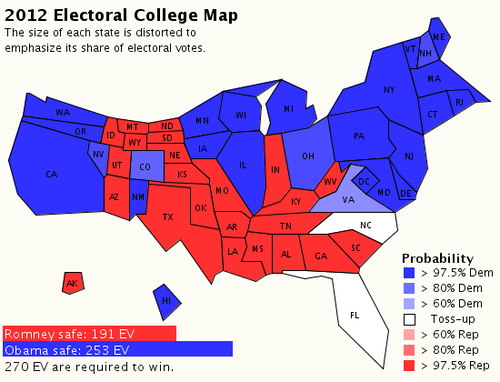 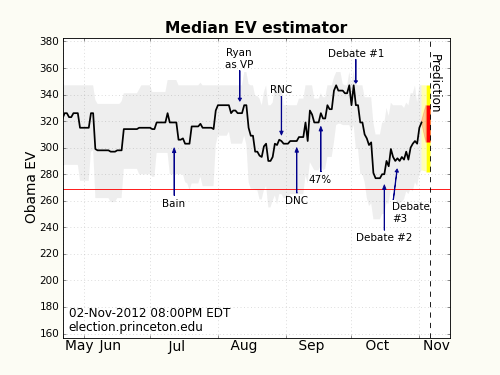 You can pretty well see what Romney's best day of the campaign was shortly after Debate #1. Sam makes a strong argument based on this graph that it was the VP debate that actually stabilized the Obama free-fall. After Debate #2, it started back up. Sorry, Romney fans.

Whatever happens on Tuesday, I will follow my wife's rule with regard to the BYU-UofU rivalry - no gloating. Except I won't follow the part of the rule about cheering for whoever is behind at any point of the game. Sorry, Romney.
at 6:56 PM