It's great to find a good book about someplace you know and love. It's even better when it is about the home of your ancient ancestors. I don't know how far my people go back in the valleys and ridges of the Black Mountains of southeast Wales, but that is where they arose, their bones now buried but first forming at the edge of those mountains.

The book is People of the Black Mountains I: The Beginning, by Raymond Williams (Mackays of Chatham, Chatham, Kent, 1989). With exact descriptions of the physical detail of the mountainous land, it tells the story of the ancient people in a serious of vignettes stretching over thousands of years in the context of a modern man on the mountain trails under a full moon searching for his grandfather. Technically historical fiction, the author has given his view of the anthropological knowledge of prehistoric mountain people and breathes life into them.

So far, the best part is when I came across this modern description of the very place where we stayed for a week searching for records of our ancestors. The night view is from the ridge from "Pen y Beacon [Hay Bluff] to Gospel Pass":

He could see the close foothills, above the short steep valley of the Digedi. There were isolated yard lights at the farms, spaced at regular intervals along the closest high pastures. Spaced in much the same way, along this northern scarp, were the places of the neolithic shepherds. On the broad flat grassland of Twyn y Beddau, towards Dan y Capel, there were scores of hollows of their circular huts. Immediately below, overlapped by the car park on the mountain road, was a marked watchstone within what had survived of a later stone circle. Beyond it, now heavily shadowed, was the rough edge of exposed rock, running along the scarp, which marked the highest point of the great glacier which had pushed against these mountains.  (Williams at 116-17.)

Oh my heck! Everyone of those features we came to know in our week up on the mountain! We stayed in the  "short steep valley of the Digedi" at Blaendigeddi Fawr! And finally, I understand the name a little better - digeddi being the stream name - "geddi" I think being a variation of "beddau" meaning the graves. But this author explains that the barrow mounds are not just graves, but the former homes of the people who lived there along with the traces of dugout, stone and earth dwellings in so many little dips and mounds in the otherwise flat pasture land.

OK, we'll see if this video works to explain what I'm talking about from when I was there in 2010:


All those little undulations in the turf are the indications of the neolithic structures. I probably pronounced all the Welsh names wrong. "Twyn y Beddau" should be more like "tow-on ah beth-eye." I've got a long way to go with my Welsh, but it means "the Twin Burials." Actually, it may be remnants of long houses turned into burial mounds by later peoples. Here's a scan of my working map, just south of Hay-on-Wye, from British Ordnance Survey (available online at OpenData - a great resource!): 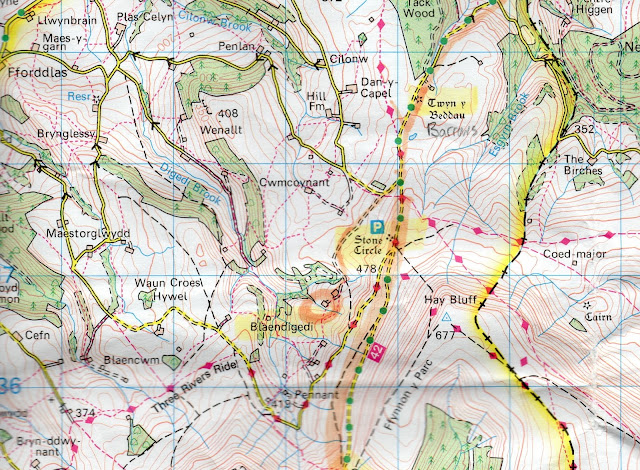 The vignette dated 2,000 B.C. (so we don't even have to worry about Pre-Adamites), tells of a strange man coming to the sheep people of the mountains. He is dressed in a red cloak and has a pet dog with him - not an animal of any apparent service - a scandal to the sheep people. He explains that he has come from the great white plain [Salisbury] to return to his homeland in the mountains. He had followed the ancient Measurers in his youth when they took the blue stones from his home mountains [to place at Stonehenge]. The Mountain People are suspicious of him but one young boy learns all he can about measuring [what we would call "Science"].

In those days, the Midwinter celebration was the affair of the women, the Midsummer of the men. The women knew that when the sun set behind a certain peak to the southwest, it was Midwinter. They would have the young men light a great fire on the summit of Pen y Beacon and see the fires spring up on the surrounding peaks, some far in the distance.  The Measurer told them that they could be missing the midwinter by a few days either way and taught them a precise way to measure. He had the women stand in a line each evening at sunset. They were to look at a particular notch in the southwest mountains. The woman who saw the sun set in that notch had a wooden marker set at that place. The Measurer told them that when the line of sticks began to curve back, that was the true midwinter. The women tolerated this for a few nights but called the midwinter on their own reckoning and the young boy helped the aged Measurer complete the measuring each night with sticks. The boy placed a stone at the bend in the line of sticks.

This is that stone:

The stone has been there for 4,000 years, give or take a few. I suppose it may have been straighter in ages past. And we were not there at midwinter to check out its accuracy figuring what its upright alignment may have been.

The story of the Measurer went on to explain that he had left the White Land because he had always been interested in measuring for measuring's sake [i.e., Science]. The people had labored with the stones and brought food because they appreciated the precise knowledge of the times and seasons from the Measurers. But some things like drought, flood and bad winters could not be predicted or explained even if the Measurer thought they could some day with more measuring just as he searched to establish the patterns of the red star in the sky [Mars]. The people became more reluctant to feed the Measurers. Some of the Measurers had declared themselves priests of the secret knowledge and while successfully predicting an eclipse, they used it to place fear in the people to require the food. And then they established guards [soldiers] to collect the food. The Measurer did not like this turn of events and left for his homeland teaching measuring on his way.

It's a great story. And there's no way to know who actually placed that measuring stone there on the side of the Twyn y Beddau common. But someone did. I have been waking up nights haunted by neolithic shepherds and measurers. There's no way at present that I can tie them into my family tree. But maybe someday . . . .