The winter solstice is actually more important to me, as I think it was for a lot of ancient people. That is the point the sun stops to move back south north saving mankind from eternal winter. Yet the summer solstice has its charms as I went out this morning before the sunrise to see if the fairy circle had appeared in our backyard. Even with our extra-wet year, it hasn't. My fourteen-year-old boy noted that we haven't seen it since we had the wedding reception for our oldest boy and his sweetheart in our backyard two years ago. Maybe she's the pixie who has spirited him away along with the circle.﻿
﻿My wife and I had a wonderful visit to Stonehenge last summer. It far exceeded expectations mainly because I had downplayed them so much in my mind thinking it would be over-crowded, we couldn't get that close, and it wouldn't be as big in real life, etc. But we got there early enough after opening that there was not a huge crowd (the tour busses were arriving as we were leaving). And while you can't walk among the stones, and certainly not touch them (unless you're a neo-Pagan on the solstice), we were able to get close enough to be awed by the silent stones of thousands of years past.

The funny thing is that the pamphlets and audio tour at the site and all the books I've read about the Standing Stones, can't come to a definitive conclusion as to what their purpose was. It doesn't help that the builders, apparently, had no written language - at least none that has been found yet. Today's experts don't know if it was a temple, observatory, calendar, pathway to the ancestors and the spirit world, a celebratory or ritualistic site. My conclusion is, why not all of the above? Temples in my religious tradition serve all those purposes. Now, that idea is not original with me, Hugh Nibley has certainly opined on the matter. But I think it's so obvious I would have figured it out on my own.

Temples in the Church of Jesus Christ of Latter-Day Saints are sacred places, literal Houses of the Lord. We go there for spiritual insight and to perform sacred ordinances that give us power from on high to accomplish the purpose of life, before, during, and after our life here on earth. Under priesthood authority we seal families together for all time and eternity - including marriage celebrations (if very reserved and quiet in the Temple as a sacred place). We perform these sacred ordinances, including vicarious baptism, on behalf of our ancestors who did not receive these ordinances during their lives on earth. And these blessings are available for all of humanity which each individual can accept or reject according to their own will, whether here on earth or in a restored paradisaical world to come, before the final judgment day. And the Temples generally face east to greet the rising sun as well as the eventual return of Jesus Christ, the Son of God, when he ushers in that millennial reign of peace. And Temples are full of the symbolism of Heaven, Earth, and Sky. 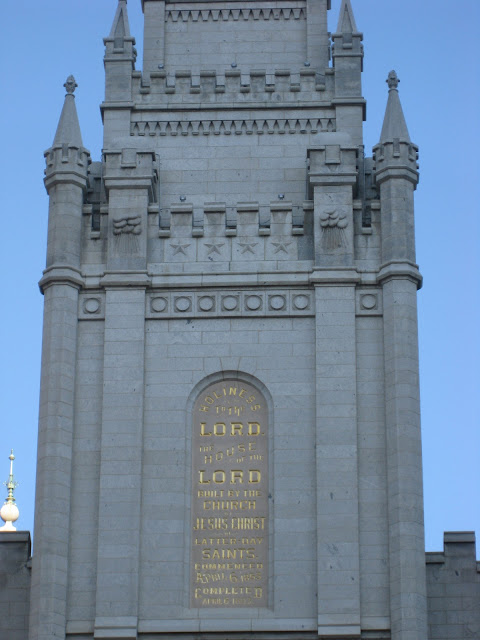 So, thinking on these things, I took my camera with me this morning to capture the Midsummer Sun lighting up the Temples. Below is the Bountiful Temple from my bus stop. I've been noticing the past few days that the sun clears the mountains and hits the golden angel just after 7 a.m. If not a pillar of smoke, certainly a flame of fire. 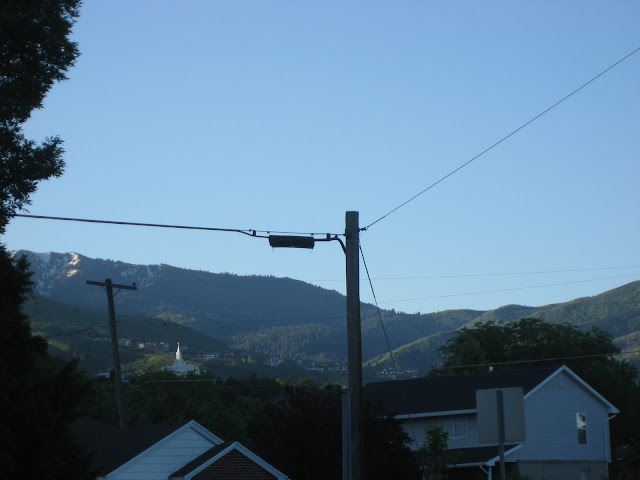 And then, my bus got me downtown just in time to see the sun hit that other golden angel.
The Temple is certainly worth celebrating and believing and covenanting.
at 6:22 PM