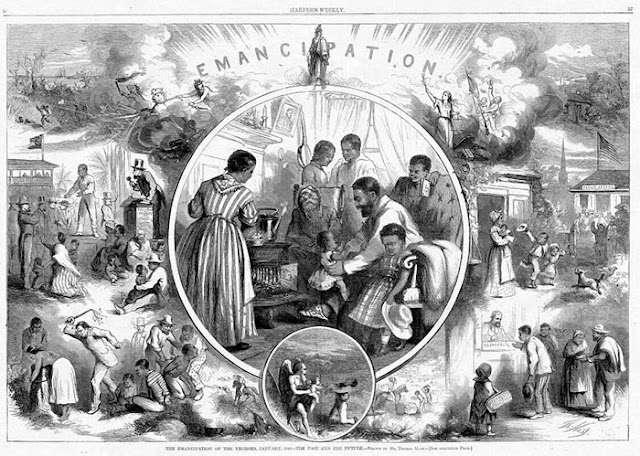 January 1, 1863, 150 years ago, the Emancipation Proclamation went into effect under the authority of President Lincoln and the difficult to define war power. See the movie Lincoln for his principled as well as down-and-dirty political fight to get the 13th Amendment removing a significant stain on our Founder's Constitution and fulfilling their ideals. At least Lincoln was able to fuse Jeffersonian principles of the Declaration of Independence with the Constitution for that "new birth of freedom."

In New Year's celebrations and resolutions let us remember this important events of that Day of Jubilee and recommit ourselves to the continual struggle for the more perfect Union.

The Union forever, Hurrah! boys, hurrah! Down with the traitors, Up with the stars; While we rally round the flag, boys, Rally once again, Shouting the battle cry of Freedom!

Verily, thus saith the Lord concerning the wars that will shortly come to pass, beginning at the rebellion of South Carolina, which will eventually terminate in the death and misery of many souls . . . . the Southern States shall be divided against the Northern States, and the Southern States will call on other nations, even the nation of Great Britain. . . . after many days, slaves shall rise up against their masters, who shall be marshaled and disciplined for war. D&C 87:1-4  (1832).

[Note the word rebellion. And it might be better to say former slaves, but it is from the perspective of prophesying the future, so current and future context are not always easy to explain or interpret. Just ask Marty McFly or Dr. Who.]