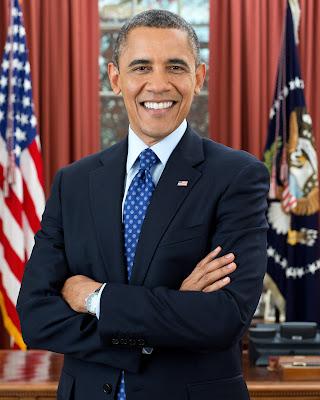 Well, I' m not actually the President, that guy above is (so just get over it). But here's my list of what I would like to see President Obama accomplish in his Second Term. I would also like to see some more Republican cooperation. This is to replace their minority philosophy that government is the problem and that the most important political priority is to stop this President with whatever he proposes (as in Mitch McConnell's stated goal last term along with many others). We'll see how many of my ideas below turn up in the Second Inaugural tomorrow. I'll bet anybody we will at least here some Lincoln quotes.

1.  Out of Afghanistan. And we hope for the best. Any future problems are first an internal problem for the Afghanistan people. If they threaten or harm the outside world again, then it is a United Nations, possibly NATO problem with UN Security Council Authorization as happened after 9/11. The United States is not the policeman of the world.

2.  End the Drone War and reestablish American principles in the Constitution about due process, 4th Amendment protections, etc. The defense of this Nation against terrorism, foreign and domestic from all types of threats, does not justify the violation of our basic principles.

3. Maneuver the Republicans not to destroy the government of, by, and for the People. Pass budgets, cut deficit (mainly by cutting the military and modifying social net for current and future circumstances), increase revenues to pay for what we are obligated and should spend - including stimulus for infrastructure and education to further the economic growth of this nation, including enhanced revenue.

5. Continue implementation on Obamacare with modifications, along with Congress, as necessary to make it work as best as possible. There should be a continued and heightened attention to mental health issues for a lot of good reasons, one of the most important is to decrease the instances of the insane using dangerous weapons of mass murder.

7.Continue pressure on both Palestinians and Israelis to come to the table for a viable two-state solution.

8. Continue pressure on Iran and North Korea not to go ballistic. And this must be an INTERNATIONAL effort. US leadership is fine, but we do NOT go unilaterally, nor do we encourage Israel or South Korea to do so. These are not US problems, but problems of the survival of this planet and we need true coalitions of multiple nations to address these issues (i.e., the UN).

9. Speaking of survival of the planet, whatever the causes of global climate change, we need to work on this problem. We keep trying to do what we can to avoid destroying ourselves by flood, famine, cold, heat, etc. etc. We need to wean ourselves from dependence on petroleum products. We need to support and encourage international programs.

10. Continue this administration free from major scandal. Everybody makes mistakes and has problems. (Just ask the Senators from Idaho.) but this administration has been the cleanest in years and our President and his family wonderful examples of American values.

There. Ten easy steps. All perfectly plausible. We, the American People who voted him in need to support him in these endeavors, put pressure on Congress, and keep positive with our family, friends, and neighbors as we move forward.

God Bless America and all the Peoples of the World.
at 3:11 PM