While my stomach recovers from illness of tragic discoveries in the neighborhood, and avoiding [modern] politics so as not to make it any worse, I return to the Wars of the Roses. 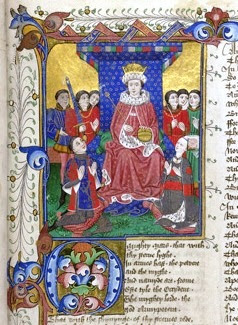 I was very pleased to find an online, public source for the beautiful picture that graces the cover of the book I'm reading. It's from an illuminated manuscript having absolutely nothing to do with the picture. But I guess that's the nature of the medieval book business.

Anyway, the picture represents William Herbert, half-brother (uterine) to Roger ap Roger Vaughan, along with his wife, the former Anne Devereaux, kneeling before the Yorkist King Edward IV. We talked previously how the Welsh kept changing sides, but these guys really liked Edward IV (Richard III, not so much). Herbert became so skilled politically, that he ended up as "custodian" of the young Henry, Earl of Richmond (future the 7th), who spent some time growing up at Raglan Castle educated by Lady Herbert pictured above.

Evans promotes the idea that Herbert was a principal adviser to Edward, helping to establish the strong monarchy principle that finally got control of the feudal warlords under the Tudors. It produced stability, at the cost of an absolutist monarchy, but in those days, the alternative was constant battles among petty warlords as- in the Wars of the Roses. Herbert's family had started out as commoners, as did the Vaughans even with some claims to ancient Welsh royalty, and he had a personal and class conflict with people like the Kingmaker, Richard Neville, 16th Earl of Warwick.

While I've asserted Welsh nationalism invoking "Men of Harlech, " we now come to the part where Welshman fought Welshman over Harlech Castle, and it was my guys, Herbert and Vaughan, who were able to subdue it on behalf of their King Edward. And I have more pictures! (courtesy of Tony Barton)

Herbert, while working for Edward IV, was still a hero to the Welsh:


Herbert may have been alive also to the passionate appeal of the leaders of Welsh public opinion that Wales should not be made the cockpit of contending English factions, but should seek to unite in an endeavour to rid the country of the baneful rule of English officials. To the poets there was no dynastic question. Now that Herbert stood in solitary pre-eminence, they appealed to him as fervently as they had appealed to Jasper to achieve unity in Wales. As far as Wales was concerned there could be no happier union than that of the Tudors and the Herberts. Evans, Wales and the War of the Roses (Alan Sutton Pub., Gloucestershire, 1995 ed.) at 101.

Herbert was putting that plan into place even if Jasper did eventually get his personal revenge. There were still a few heads lost before the Earl of Richmond established peace in the land. More later. . . .
at 12:24 PM