That They Rudely Not Aryse

A used book shop in Reston, Virginia had this great book on Wales and the War of the Roses. I checked the index and it's full of references to my families of Vaughan, Gam, and Herbert. It even has a picture of the tomb of the Lady Gwladys! Of course I had to buy it.

I'm still pretty weak in medieval and even modern Welsh. My Middle English isn't so great either but it's much, much easier to understand. I really enjoyed this quote to explain the tension between the English and the Welsh. The point comes across well enough:

Be ware of Walys, Criste Jhesu mutt us kepe,
That it make not oure childeis childe to wepe,
Ne us also, if it go his waye
By unwarenesse; seth that many a day
Men have be ferde of here rebellioun
By great tokenes and ostentacioun.
Sech the menys wyth a discrete avyse,
And helpe that they rudely not aryse
Ffor to rebelle, that Criste it forbede;
Loke wel aboute, for, God wote, we have nede.

Political Poems and Songs Relating to English History: Composed during the Period From the Accession of Edw. III. to that of Ric. III., Vol. 2, edited by Thomas Wright (Master of the Rolls, London, 1861)

I picked up that "childeis childe" means "children's children." The Welsh were conquered by the English, but it took a few centuries.

I was interested to read in the initial pages of the book, written in modern English but from a Welsh perspective, that the switches from the white and red roses in the famous war were not so much maneuvering for personal gain, but maneuvering for Welsh Nationalism. I'm not sure I'm buying that, but maybe there's something there. Yorkists who were Lancastrians at least with Henry V clearly ended up favoring the Tudors. I do have this confirming piece of evidence I saw on the wall of a building in Hay-on-Wye, one of my ancestral hometowns: 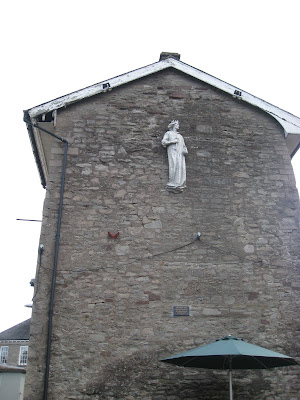 The plaque reads: "Henry VII: First Welsh King of the English." I guess we got our revenge after all.
at 9:01 PM