The Lady Gwladys, Star of Abergavenny 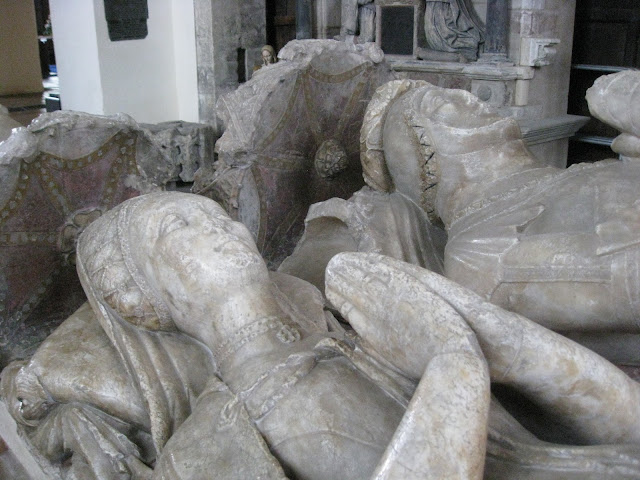 In honor of International Women's Day, I pay tribute to a noble Matriarch, the Lady Gwladys, Star of Abergavenny - "the happy and the faultless." Or, in other words:

from Gwaith, Poetical Works of Lewis Gynn Cothi at 1.

I have got to learn more Welsh!

The effigy above (and below) is of Lady Gwladys next to her second husband, Sir William ap Thomas, progenitor of the Herbert Family, Earls of Pembroke, of Raglan Castle. It is said of Lady Gwladys that she married well - twice. Her first husband, Rhossier Fychan, or in anglicized form, Roger Vaughan, was knighted, according to tradition, on the field of Agincourt for his sacrifice in defense of the King, Henry V. This posthumous honor set up his widow to remarry a wealthier, titled man also connected to the Royal Family and whose descendants did well enough (changing sides during the War of the Roses) to come out at the end with the Tudors, Henry VII being raised for a time at Raglan (sort of "under protection" when the Earls of Pembroke were still Yorkists). Her father, Davydd Gam is mentioned in Shakespeare's Henry V in the lists of the British dead, presumably at the side of his son-in-law.

The Lady Gwladys was a patroness of Welsh culture and arts. I suppose that's how you get Welsh bardic poetry written about you. Her sons by Roger were set up well by the patronage of her second husband and they had estates at Tretower and Hergest. Some were good and some were bad - her son Thomas a.k.a. "Black" Vaughan, was a cruel lord who supposedly came back to haunt Hergest Castle as a ghostly canine - claimed by the locals to be the inspiration for Conan Doyle's "The Hound of the Baskervilles" changing the related surname "Vaughan" to something more romantic sounding (and yes, we are related to the Baskervilles, too). But even Thomas's family were patrons of Welsh culture maintaining the Red Book of Hergest, one of the principal sources for the modern Mabinogion - or collection of Welsh mythology including my dear Peredur, the original Parsifal, of the Roundtable and Holy Grail fame.

I have ancestral lines that go back to the Lady Gwladys by both husbands, making her one of those genetically powerful ancestresses. Here's to ancient Matriarchs!