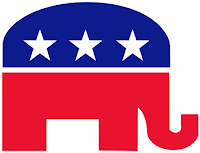 My wife went to the Republican caucus last night. There were 178 in attendance at our precinct as opposed to 10 at the Democratic caucus. Now is not the time to talk balancing out the neighborhood a little, but the vast infusion of numbers had its influence to moderate the participants into a rejection of the tea party extremists in favor of our sitting Senator Orrin Hatch.

Tempting as it may be to fall into Monty Python "Silly Party" parlance, Senator Hatch is certainly no moderate. He is clearly conservative. But he is not of the tea party. The slight turn towards the center did not bring the local caucus into the moderate middle, but it did save them from going over the cliff on the far right of the mountain pass.

The oddly democratic process in Utah is to meet in local precincts to decide on delegates to county and state conventions where the slate of party candidates is actually decided. Only if there is not a clear winner by majority (60%) in the conventions, do the candidates appear on the Primary Election ballot scheduled for June.

My wife loved the process last night, visiting with the neighbors, watching and listening to the discussion. They established their own rules for putting names forward and had brief statements of their backgrounds and whom they were supporting. The most vocal, yet moderate, were those who stated their preference for Senator Hatch. Some of those may have been recruited by the Hatch campaign or at least encouraged by Romney robo-calls in his support. (We've certainly had our share!)

The best part was that my wife was texting me to keep me informed and then started asking questions about the various candidates, particularly the slew of them for the newly redrawn 2nd Congressional District we now find ourselves in as part of the legislature's attempt to gerrymander Matheson, our only Democrat, out of Congress. He is now running in the newly created 4th. I knew a few of the names and googled the rest to determine to what extent they seemed on the tea partier bandwagon. I let her know that Philpot and Liljenquist were definitely so, and could pretty much tell with the rest based on background or name recognition. Once again, not that we were finding any moderates, just avoiding those already in free-fall off the edge of the wagon road.

On the bus this morning, I overheard my friend whose dad worked for the Consulate in Brazil talking to another regular rider. He was explaining his caucus experience to his friend and I realized from some of the other names he mentioned that he was talking about the same precinct meeting my wife had been in. I commented and nodded to interject myself a little into the conversation making it clear that I had been at the other party caucus on Tuesday night. It's OK because they probably think me a weirdo anyway.

But my bus friend said something really interesting. They both work at the LDS Church Office Building and were talking about the church's encouragement to have more participation in local caucuses (of whatever party). He said that the intent was to get more participation to get both parties away from the fringe elements. Hallelujah! Well, it worked this time, at least for the Republicans. The Democratic fringe in Davis County is about as radical as acknowledging the existence of another political party in the neighborhood.

And I close with something from Newt Gingrich, of all people. You have to think about this deeply and a little backwards, but he said something rather profound about the Republican Party sort of in response, perhaps unintended, to Reagan's philosophy that "government is the problem." I mean, my question to Reagan and his imitators over the last few decades has been, "How do you expect to govern if you think government is the problem?" The newt provides this answer:


“We cannot be a normal party. If we run a normal campaign trying to govern within the framework of the current system we have no future because people would rather have Democrats do it, they at least enjoy it,” he said. “We are miserable at trying to govern in their system.”

Long live our Democratic Republic! The process is everything!