Fanfare for the Young Man 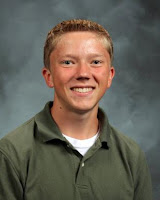 Tragedy hit Viewmont High School students last night as my two youngest boys reported to their mom and me by bits and pieces from phone texts, social media, and news reports that one of their fellow band members, Andrew Tolman, had been killed in inexplicable traffic accident. You can read the report from the Deseret News here.

The tragedy is much worse for Andrew's family. And our hearts break for them. Our family prayers last night included them and a plea that we all be blessed with greater love and care for those around us because life is so very fragile.

This is a hard and imperfect world where we learn by sometimes horrible experience how to love each other and trust in God. Neither of those is always easy. But they are the only hope we have to make this world a better place as we trust in a much better one to come.

My boy who is a senior and was a drum major for the marching band this last season was not a close friend of Andrew's. In fact, they experienced their youthful conflicts and differences as teens and musicians often do. My wife reminded our boy last night that he had recently been on good terms with Andrew and that was a good thing to remember now that he had passed on.

My son told his mom when he got home from school that Andrew's friends and fellow musicians gathered in the band room as school began this morning and talked about Andrew. The band teacher said that it is important to go on with the activities and programs they had scheduled, not because that would be what "Andrew would have wanted" in some trite sense but because that is what life is about. My boy, who had directed a recent ensemble piece in which Andrew had participated, suggested that they perform that piece at Spring Concert as a tribute to Andrew. The band director could conduct and my son would take Andrew's part on the trumpet. The piece is Aaron Copeland's "Fanfare for the Common Man." Highly appropriate.

I found this version from some other young performers:


The point of Copeland's piece is that every man deserves fanfare. Andrew certainly does.

And I testify with fervent faith that because of the sacrifice and resurrection of our Lord Jesus Christ:


The spirit and the body shall be reunited again in its perfect form; both limb and joint shall be restored to its proper frame, even as we now are at this time; and we shall be brought to stand before God. . . .

Now, this restoration shall come to all, both old and young, both bond and free, both male and female, both the wicked and the righteous; and even there shall not so much as a hair of their heads be lost; but every thing shall be restored to its perfect frame, as it is now, or in the body. . . .

The fanfare of that trumpet on the morning of the Resurrection is what I am waiting to hear.